Above: Evelyn Powers is a welcoming presence to the downtown community of Orlando Lutheran Towers who stop in to pick up a danish and coffee at the lovely cafe shop.

We invite you to listen as she tells her story of life in the City Beautiful!

Evelyn Powers came to Orlando in the 1960s to work at Orange Memorial Hospital. She lived at the Y.W.C.A. women’s center on the corner of Magnolia Avenue and Colonial Drive until her parents made the move to Orlando. She remembers when the bus stop was on Pine Street and downtown was where you went shopping. Her first church was Park Lake Presbyterian Church and she fondly remembers the good times they had at the young adult meetings on Sunday night.

Today, Evelyn goes to Southside Baptist Church, which is a block from her house. She is the church clerk, sings in the choir, and served for years as the church hostess for Fellowship Sunday and the Thanksgiving Day Church Dinner. She first started going to Southside Baptist Church with her children. They are now grown and Evelyn proudly shares she has six grandchildren.

In this interview Evelyn tells the story of serving as chaperon for her son and four boys when they made their fourth grade school trip to Sea World. She says the five boys went on through school together, became close friends, and everybody called her mom.

Evelyn enjoys living in Orlando because it is easy to get around; shopping is nearby, the airport is close, and the beach is only an hour drive. Regarding her work in the downtown community  at Orlando Lutheran Towers, she says, “They’re very  friendly, just real nice, polite, concerned about you… It’s a good community for people to live in.” 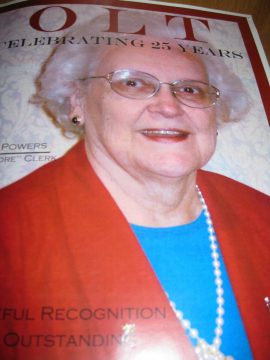 Photo of Evelyn Powers in recognition of 25 years of outstanding service at Orlando Lutheran Towers in downtown Orlando.

Interview conducted on February 20, 2013 with Evelyn Powers at Lutheran Towers. 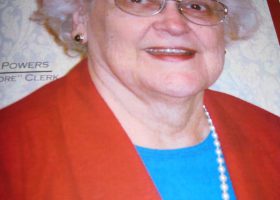 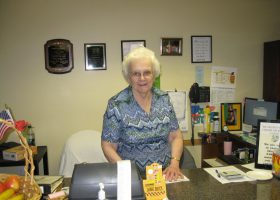 Evelyn Powers is a welcoming presence to the downtown community of Orlando Lutheran Towers who stop in to pick up a Danish...