The Bates Motel and house were part of Universal Studios Orlando from 1990 to 1998, replaced by Woody Woodpecker and Curious George. If you have seen the movie or just heard the piercing music that accompanies Hitchcock’s famous shower scene, you can imagine how creepy it was to walk past these structures.

The house and motel sets were recreated for a not so popular prequel entitled Psycho IV – The Beginnings. They were not the originals – but sufficiently creepy all the same. 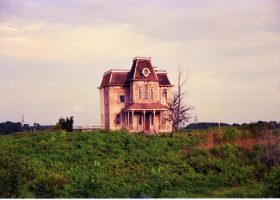 The sets for Bates Motel and house were recreated for the film Psycho IV and were located at Universal Studios Orlando from...