ABOVE: This photograph shows Church Street Station as it was every evening before the crowds showed up or while they were being entertained in one of the four show rooms. The antique fire engine sits in front of Rosie O’Grady’s Good Time Emporium, further east several vintage elegant automobiles from a classier era sit in from of Apple Annie’s Courtyard and Lili Marlene’s Aviators Pub. One of he many horse drawn carriages waits on passengers. In the distance beyond the walkway over Church Street connecting the parlor rooms (banquet rooms) above Lili Marlene’s and on the south side of Church Street above the Bumby Arcade, you can see one of the Rosie O’Grady’s Flying Circus hot air balloons ready for tethered balloon rides. From the personal collection of Rosie O’Grady’s Red Hot Mama Miss Ruth Crews.

Church Street Station is gone, but remains in the hearts and memories of all those enjoyed the music, dancing, dining and fun! Relive the past through these amazing publicity photos from the files at the Orlando Public Library and the personal collection of Miss Ruth Crews – Rosie O’Grady’s Red Hot Mama!

The color photos feature scenes of many of the entertainers who doubled as waiters and waitresses and dancers at Rosie O’Grady’s, Phineas Phoggs and the Cheyenne Saloon and Opera House. There are also photos of The Exchange (with a glimpse of the Commander Ragtime’s sign – “The Grandest Place on Earth”) on the upper level, the Cheyenne Saloon and Opera House, Lili Marlene’s Aviators Pub and Restaurant, Church Street Station street scene, and a photograph of the Church Street Station Flying Circus and transportation fleet.

ABOVE: Black and white artist’s rendering of Bob Snows grand dream for Church Street Station. The aerial view looking west with I-4 in the background and Church Street train station in the foreground. The original Rosie O’Grady’s complex including Apple Annie’s Courtyard, Lili Marlene’s Aviators Pub, and Phineas Phoggs Balloon Works (under construction at the time the image was created) is on the right. On the left is the new complex in the works that would eventually include the Bumby Arcade, Cheyenne Saloon and Opera House, Orchid Garden Ballroom and Convention Center with the actual train station on Church Street at Gertrude at the lower left.

ABOVE: Phineas Phogg’s Balloon Works from the front dance floor / DJ area looking toward the front door on Church Street. The bar is on the right and all seating upstairs is in Gondola shaped balconies with balloons above. Apple Annie’s, Lili Marlene’s and Phineas Phoggs were all interconnected and shared phone booths and restrooms.  Phineas Phogg’s waitresses performed a disco routine each hour. 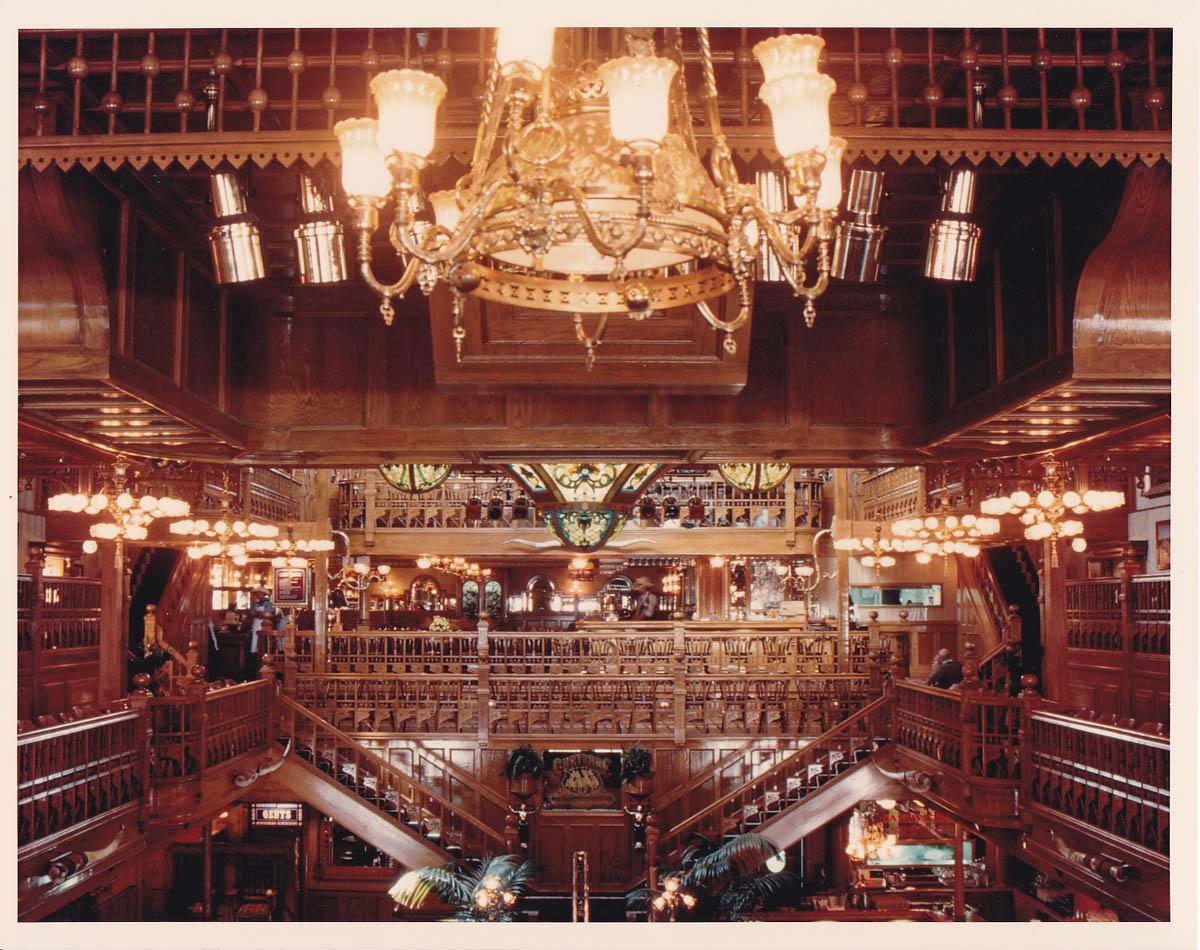 ABOVE: Photo of the ornate hand crafted interior of the Cheyenne Saloon and Opera House’ Taken from the 2nd level above the bandstand toward the back of the venue showing the intricate carved wood railings and stairs, ornate chandeliers and beautiful stained glass skylights and windows. You can see the restaurant area on the second floor in the background serving great barbecue and simple sides. The third level had “just for fun” card games and pool, the wonderful wooden Indian and a restroom. The second level was accessible from the second floor at the Orchid Garden and during crowded events, regulars would duck into the Cheyenne, run up the narrow stairs shown with the dark carpet on either side of this photo (difficult in dancing shoes!) to the tiny third floor restroom as not many people knew it was there. We’d make it back with plenty of time to spare to hang out with our friends in the band and dance until 2:00 a.m. 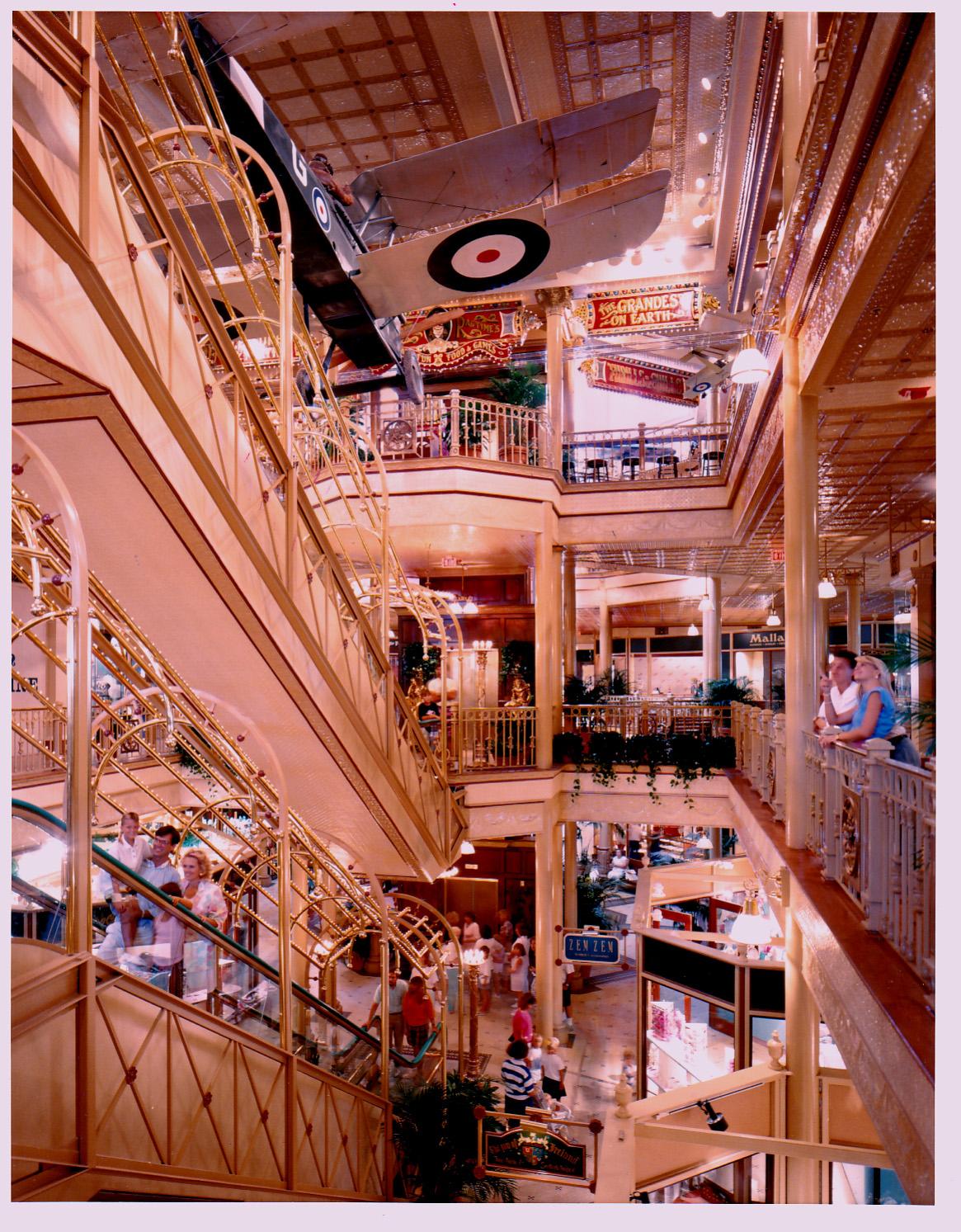 ABOVE:  This photograph shows the elegant brass and glass and escalators with Tivoli lights and glass enclosed elevator overlooking the fountain in the center section of The Exchange at Church Street Station. The huge three story interior featured unique shops on the first two floors with a food court that connected by way of an enclosed walkway over the train tracks to Church Street Marketplace which is now 55 West. The third floor of The Exchange was called Commander Ragtime’s the Grandest on Earth and was a huge assortment of fun games for the entire family. They had pool tables, old fashioned arcade games, simulator type games, kids games (who doesn’t like whack a mole?) and prizes! We stopped going to CSS for a while when the kids were at the age that they’d rather play games to try to win cheap prizes than to listen to the music. Thankfully, that passed quickly. Our favorite stores were the huge rock and gem store, the family crest store, the fudge factory and of course Victoria’s Secret! Never knew when Elvis might be making an appearance!

Hanging above the escalators were two vintage aircraft, one of them a Fokker D (shown here) is a German plane from World War I. Both plans had what appeared to be a live person from that era dressed in complete aviator’s garb including leather cap and goggles. when standing on the third floor, the craft were poised as if they were heading right for you. If you look closely you can see the ornate tin ceilings and moldings and amazing attention to detail in this new structure made to look turn of the century. It captures the excitement that spanned the years from the gay nineties to the roaring twenties.

ABOVE: Apple Annie’s Courtyard filled to capacity with Mother’s Choice playing in the background to the right of the famous fountain which featured a blazing fire in the middle. If you continued down the hall past Mother’s Choice, you’d come to the telephone booths created from old confessionals taken from a church and onward to Phineas Phogg’s disco – the only entertainment venue limited to persons 18 or older. Directly to the right was Lili Marlene’s Aviator’s Pub and to the left was Rosie O’Grady’s. Mother’s Choice was included on a live album recorded at Church Street Station called “Sights and Sounds of Church Street Station.” There are several songs by the band members but one – a parody of “Charlie on the M.T.A.” – was a favorite of everyone who had visited the Magic Kingdom and ridden on the monorail system.

ABOVE: Black and white publicity photo for Lili Marlene’s Aviator’s Pub. The “Pub” designation really did not fit the quality of cuisine offered at Lili Marlene’s. There was an ice carving every night, carnations in vases at the tables that were given to the ladies dining there. The large banquet table in the back was said to be the conference table of Al Capone and the phone booths (before cell phones) were rehabbed ornate wood confessionals from Catholic churches that were torn down. Visible in this photo are the booths with the seating constructed from church pews, the aviation memorabilia on the walls. The waiters were dressed in tuxedos and looked more like groomsmen at a posh wedding and Scott Lamoreaux looked more like a Hollywood leading man than most that appeared on the covers of movie magazines. From a set of 12 publicity photos in a file at the Orlando Public Library.

ABOVE: Black and white publicity photo of all the performers and staff of Church Street Station crammed into an image of Rosie O’Grady’s first floor. You can see most of the usual suspects including Rosie O’Grady’s Red Hot Mama Miss Ruth Crews, singing waiters, can can girls Holly and Dolly, Laurel and Hardy, Harpo Marx, Spatz Donovan, Jim Mahiak, Randy Morris, Rob and Jenny, Warren Sauer, Mother’s Choice and a flower girl from Apple Annie’s Courtyard, performers from the Cheyenne Saloon and Opera House and many more staff from behind the scenes and behind the bars.

From a set of 12 publicity photos in a file at the Orlando Public Library.

You can view all of the black and white publicity photos combined in this one file or the peruse the individual photographs under Images below.

Black and white publicity photo of one of Church Street Station's hot air balloons. This one was dedicated and decorated for the...

Black and white publicity photo of Apple Annie's Courtyard filled to capacity with Mother's Choice playing in the background - top to...

Black and white publicity photo of Rosie O'Grady's entertainers gathered on the staircase on the first floor behind the bandstand leading to...

Black and white publicity photo of all the performers and staff of Church Street Station crammed into Rosie O'Grady's first floor. You...

Black and white publicity photo of the interior of the Cheyenne Saloon and Opera House with the band playing in the background...

The third floor at the Cheyenne Saloon and Opera house had pool tables and card games (no gambling) and the best view...

Black and white publicity photo for Lili Marlene's Aviator's Pub. The "Pub" designation really did not fit the quality of cuisine offered... 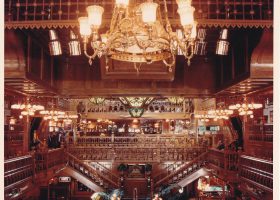 Photograph of the ornate hand crafted interior of the Cheyenne Saloon and Opera House at Church Street. Taken from the 2nd level...

At Church Street Station nothing was as it seemed - it was always better! The waitresses at the Cheyenne Saloon and Opera House...

Rosie O'Grady's Can Can Girls

Guests were treated to a bit of French culture during each show at Rosie O'Grady's Good Time Emporium! Female waitresses would don...

This photo of Lili Marlene's Aviators Pub and Restaurant is taken from Church Street looking through the front window. You can see...

This photograph shows Church Street Station as it was every evening before the crowds showed up or while they were being entertained... 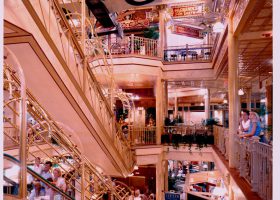 This photograph shows the elegant brass and glass and escalators with Tivoli lights and glass enclosed elevator overlooking the fountain in the...

A collection of twelve black and white publicity stills from entertainment venues at Church Street and the CSS hot air balloons. Scroll through all twelve in this single pdf file.