At the turn of the century, the Lake Concord area was semi-rural. Near the lake were orange groves, and a few homes of grove owners. James P. Wilcox was a prominent landholder. In 1910, Judge Thomas Picton Warlow and his associates bought much of Wilcox’s land on the lake’s southwest shore for development; they called their subdivision “Concord Park Addition” to Orlando. The central section was subdivided into smaller lots in 1911, but when development stalled, the configuration of seven large lots was restored. In 1914, C.W. Rowe bought the two westernmost lots and created 15; two “Rowe” houses remain. Donald Dudley acquired Rowe’s northern holdings and created a subdivision in the later 1920’s. Judge John M. Cheney bought the five remaining large lots. His estate lost them at foreclosure during the Great Depression. The purchaser was the Star Finance Company; John N. Huttig, C. Arthur Yergey and Vernon Badcock were associated with this company. In 1934 Yergey and Huttig each bought one lot, and Badcock, the remaining three. The Yergeys and Huttigs had planned the houses they would build next door to one another. In Depression Florida, not only land but also the services of architects and builders were bargain priced. Laura Randall Huttig was a second cousin of young architect James Gamble Rogers and the Huttigs and the Rogers were neighbors and friends in Winter Park. Naturally the Huttigs chose “Gamble” to design their house, and no doubt encouraged the Yergeys to retain him also. The Huttigs soon bought the Badcock lots, selling two to families who, before the 1930’s ended, built two more fine homes.

This Depression era undertaking began a special period in Lake Concord’s history. The Yergeys added another house (805 Edgewater) to the lake scene in 1937. They sold their Peachtree Road residence to a son of philanthropist Grace Phillips Johnson, who built O-Po-Le-O, “House between the Waters”, on the west shore in 1928 (1005 Edgewater). Noted knife maker Bo Randall, Laura Huttig’s brother, built a house (demolished for I-4) on the north shore in 1937, with W. Kenneth Miller as architect and McCree as builder. The same pair designed and built 500 Lakeview on the north shore for Martha and William Jayne in 1940. In 1950, Anna and Burton Smith (Gamble Rogers / McCree) Louis and Flora Hand and Joseph and Peggy Moody (R.B. Murphy / McCree) added more large houses to the north shore. Friends and relatives visited back and forth by boat. Children practiced swimming in the lake. Residents still enjoy Lake Concord for boating, waterskiing, swimming and fishing and residential construction is again underway, with one new house and one large addition in progress. 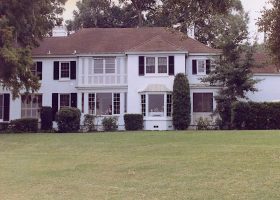 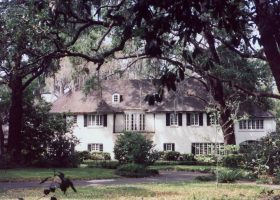 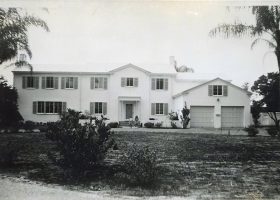