1101 West Princeton St. Historic house description quoted from the 12th Annual Historic Homes Tour ticket presented by The College Park Neighborhood Association. “S.A. Atha took out the building permit for this fine home in January, 1928. According to Wayne Cooper, it was a very well built house. Atha visited the site daily and insisted on the best materials and workmanship, including triple-thick plaster and paint. The house was estimated to cost $12,000.

In the early 1900’s, the well-to-do Athas drove to Florida from Beaver, Pennsylvania, for the winters. Seeing that real estate man David Cooper had no car, Agatha suggested a partnership whereby he would drive clients to the properties, while Cooper handled promotions and sales. Atha had advised developing College Park for the common man “because there are so many of them”, but few such men could buy even a small lot in 1928. Thus Atha turned 23 lots into an estate. In 1932, Atha died. His wife Etta Galey Atha remained in their home until 1940; their son Harry owned it until 1944, when contractor Robert E. Carrigan and his wife Louise purchased it.

In the early 1940’s the Hazen family rented the house. Lee Hazen was sent to Orlando by J.C. Penny to open the Penny’s store here. His daughter Sallie recalls that the property took up the whole block, with an orange grove on one side of the house and a field on the other. Contractor Lorne Smart and his wife Inez bought the house in 1955. They sold it in 1967 to Tom and Olive Brownlee, founders of Brownlee Lighting Company. Tom Brownlee was also a Chamber of Commerce officer who served on the Orlando City Council from 1978 to 1982. The house was important in the lives of the Brownlee children.

Since purchasing this grand Colonial Revival house in 2001, the present owners have carried out careful restoration activities. The house is unusual for College Park due to its large scale and its roof. The hip roof is an unusual feature for this style of house, but its large decorative brackets are outstanding in terms of their size and level of decoration. Houses of this type are usually a bit more restrained in their detailing. The house retains many of its original features, including the one-story wings, a small entry porch with a roofline balustrade and wood multi-paned windows. “

College Park developed as a neighborhood within the city of Orlando. The name did not come from a college. It originated with a developer, Walter Rose, who named streets after Ivy League colleges in 1921. In 1925 another development company, CABCO, named the first of their subdivisions College Park… excerpt from the Historic Homes Walking Tour The College Streets of College Park Brochure.

Homes included in the brochure: 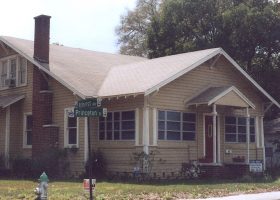 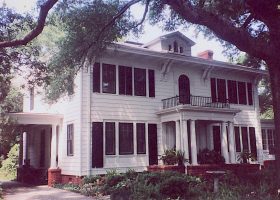