The oral history event was held at the College Park Community Center located at 2393 Elizabeth Avenue in Orlando on September 22, 2014.

How did you come to live in the College Park area?

My name is Bertie Hunt and I was born here in College Park. I’m third generation…

I’m Lynda Swenk. My parents came down here from Philadelphia in 1949 and they built the house in the new subdivision where Westmoreland dead ends into Edgewater High School. So it’s before they built Edgewater [high school]. They knew it was going to be there but it was still orange groove at that point….

I’m Bunny Bennett Parish and my parents moved into College Park in 1947 and I came along soon thereafter so I was born at Orlando General Hospital back then. It’s changed it’s name over the years. My parents came from Georgia but both of them came to Orlando in 1926….

Dann Pottinger… I grew up on Seville Place where my father and mother had bought a home there just after WWII…. 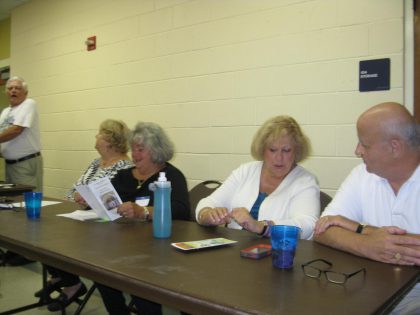 Bertie… I lived on Ellwood which ran into Seville so we lived halfway between Seville and Colonial Drive. It was just a brick street with big oak trees, no sidewalks at that time. They put sidewalks in later on. We played up and down the street, rode our bikes everywhere. Just went all over College Park on our bicycles… There were a lot of vacant lots at that time. Grandfather had the house built in 1913…. 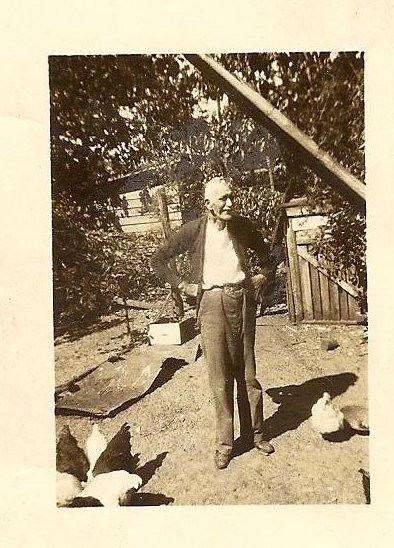 Lynda… The streets were very similar. Ours were paved. This was a newer area of College Park. But what was nice you could ride your bikes. I had a dog that would follow me everywhere. She’d follow me to school. I’d have to call my mother to pick up the dog and take her back home You know it was just a different time. I went to Lake Silver and you know you could walk to school without worrying about anything. And you know the backyard did back up to Edgewater’s property which was really nice. You know in August bands would start practicing so we all just enjoyed the music of the bands. And that’s where we played on the tennis courts. We played on the football field…

Bunny… I grew up in Palm Terrace and I thought those were the best two blocks, and I still do, in College Park. Because those two blocks all have deeded access to a lot on Lake Silver. And so we could always go to the lake and go swimming. We first lived on Western Way which is a little tiny circle off of Reading. And then my parents in 1952, W.D. Murdoch built their house on the corner of Northumberland and Westmoreland, and we moved there. And that year Northumberland was dirt and it was orange grove across the street. And then they were building the school and so then they developed houses from our house to Lake Silver. But when we moved there we were the last house in the city…. 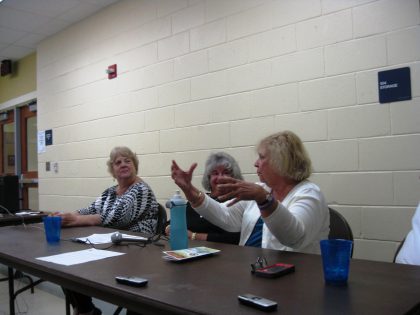 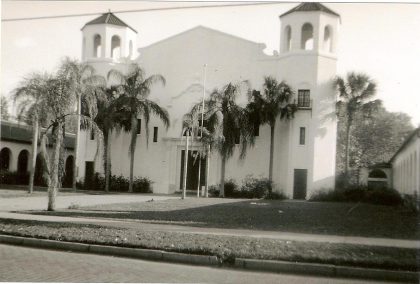 Lynda… Lake Silver was very progressive though. I mean they had a great reputation from the very beginning. It was relatively large. We had four classes for every grade level and it was 1 thru 6. We rode our bikes around it…. You know we always played on school property after school. I don’t remember any vandalism….

Bunny… I did go to Mrs. Coe’s private school for kindergarten and first grade because I wasn’t old enough…. A little stone house on Princeton just a house west of Northumberland. And she had kindergarten through about 4th grade. She had a whole classroom of kindergartners and then the other room was a one room schoolhouse, all the grades were together. And that was quite an interesting experience with her. She was an older lady, very stern. And she had turpentine up on the top shelf of the bookcase and she said if we talked she would paint our tongue with turpentine. And she walked around with a little ruler and she would tap it on the desk in front of you. So we were all very good. But I would be remiss if I said my education ended at Lake Silver, Lee and Edgewater because I was at Princeton for almost 9 years. And I see some of my parents are in the audience here. And I think that’s one thing we’ve talked about already. College Park – all the schools are wonderful and I think that’s because of the community and people in the community…

Dann… Miss Hardin… she had three unmarried sisters that some of you might remember around town. They held the door open and closed it at The Rosalind Club every week. But Miss Hardin was a wonderful teacher at Concord Park. I went four and five year old to Cathedral School which was down across from Eola Park across from the Sperry fountain. It was the predecessor in ways of Trinity Prep. It was owned by the Episcopal Church…. And then Concord Park and Robort E. Lee. Talk about exercise. I was a chubby little sixth grader that my mother decided would ride his bike through Seville Place to Robert E. Lee and I did every morning and back. And talk about dirt roads. The back way without traffic which is the way I had to go was Edgewater Court down and at Golfview, it picked up Rio Grande. And Rio Grande was dirt from there to Princeton Avenue…. 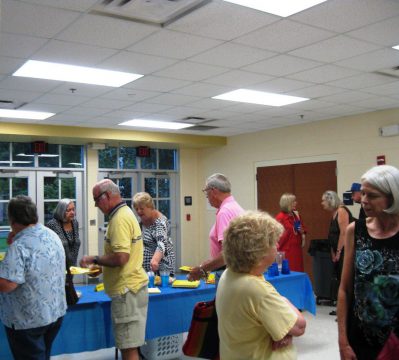 What kind of local gatherings do you remember?

Bertie… Concord Park always had a big festival. Like they had the May Day Festival. 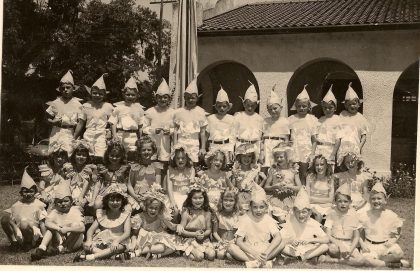 Then we had a Halloween Carnival, too. And the parents worked the carnival. And we had big Christmas programs. Every room decorated their room as Christmasy however they wanted to do it. I remember my dad was the one who cut the tree down and he’d bring it to the school and we’d decorate it. It was just a lot different from what it is today. It was a whole community…. 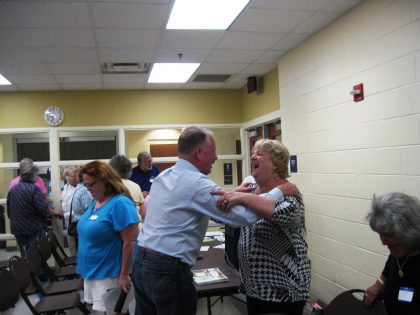 Lynda…Another big event was the centennial in 1956 and all the schools participated. We made long dresses and wore little bonnets. And all the men grew beards. My father grew a beard. Everybody in town had a beard. And College Park I remember Edgewater Drive they had a very big party. And the other thing that happened in College Park, there used to be a fair in the fall. They had a big Ferris wheel…

Dann… Corner of Vassar and Edgewater. It was in that empty lot. It had a Bullet and a Ferris wheel… Donald Boone and I used to sell mistletoe at Christmas. We’d go door to door to earn about $5.00 – $10.00 each and that took a lot of door to door. It was levied out. $5.00 of it we spent riding that darn Bullet and $5.00 I remember one year we both walked across to the Western Auto and I bought my mother’s Christmas gift and he bought his which were those nested green mixing bowls with the finger thing on the outside. Everybody had them.. 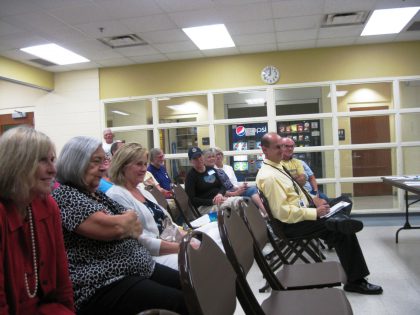 Bertie… You got up and you had breakfast and went to church. You went home you had lunch and you went to the movies. I went to Concord Park Methodist Church in College Park. It’s right there on Parramore and Arlington.

Bunny… Our Sunday was the same. We got up, we went to church, College Park Methodist Church right here on the corner. And then my grandparents lived in Lockhart and my uncle had groves there. He had built a little house next to his house. And so after we had lunch on Sunday then we’d go out there because both my parents were from very large families. And people would congregate at my grandparents…

Dann… I grew up at St. Luke’s Cathedral, the Episcopal Church downtown. And we were right there. My mother was on the Altar Guild. I started as a candle bearer, before you could become an acolyte, and anyway it was a great place to grow up….

What did you do during the summer?

Bertie… We used to play in the creek between Westmoreland and Edgewater Court. We played out there. We weren’t supposed to go down there because of the snakes and the alligators, but we did anyway. I got all the kids together one time, there was about eight of us. I had a hard time organizing this but I did it. And we had our shovels and we were going to build us a cave. So we go down to the creek and we start digging… 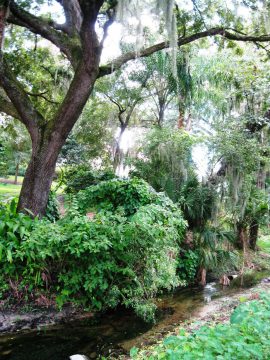 The creek running through Overbrook Park to Lake Adair 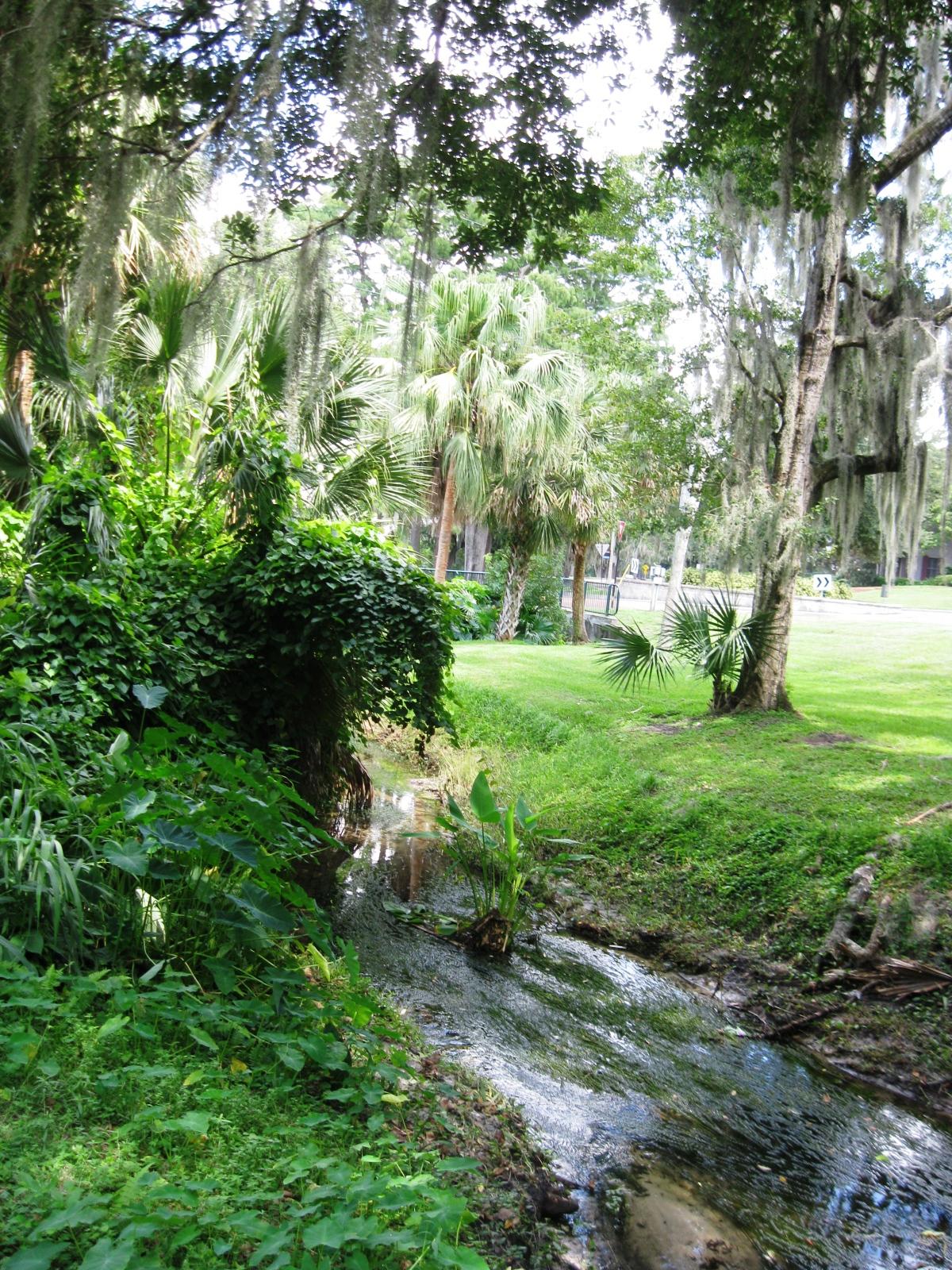 Lynda… We had recreational programs… In fact, a girlfriend of mine talked about coming here to this property and Edgewater High School. I mean it was five days a week and it was until 5 o’clock. It was great! I mean they had swings inside where you could jump up! I mean they would never allow that today. You could jump off the bleachers on the swing and swing out. They had trampolines. They had art programs….

Dann… You know you mentioned the creek… The creek is water that comes out of Spring Lake over where the Orlando Country Club, it runs under 441, it comes down a narrow creek and that is really some of the headwater that flows all the way to the St. Johns River. If you’ll follow me, you come out of Spring Lake, you come under 441. The creek runs between north and south Overbrook Drive runs into Lake Adair. Then when you go over where the Grace Phillip Johnson estate is or was called that. It flows into Lake Concord. And at Lake Concord it flows into Lake Ivanhoe. And at Lake Ivanhoe it goes underground to Lake Formosa where the Youth Center was over there, used to be. And then it goes into Lake Rowena, into Lake Sue and it takes the Howell Canal, the start of it at Mead Gardens. Flows through in the back where my wife grew up and goes into Lake Virginia, the Winter Park Chain, north end of the Winter Park Chain, it flows into the Howell Canal that goes into the St. Johns River… 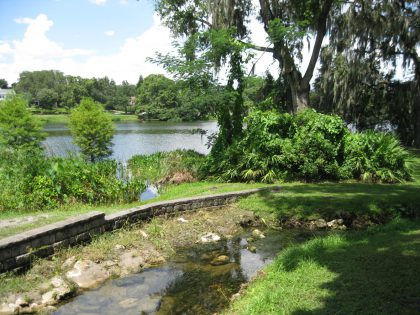 View of the creek streaming from Overbrook Park into Lake Adair.

Bunny… My brother and the kids across the street, the Beary brothers, our dads bought a Boston Whaler together for the three of them. They left it – the two blocks from Northumberland to Lake Silver has a narrow lot access and they left the boat down there just pulled up on the shore. They stayed on the lake all day long every day all summer and left the boat there….

Dann… I have a memory of the walk to Concord Park or Concurd as we called it. You could almost make a meal in those days if any of you were my age and grew up here. Because the Suriname cherries would be there, the guavas that would grow wild all along, the catlias and the little read ones, the bigger ones, the little red hibiscus that don’t open… the church cap. I mean, you know, oranges, tangerines all along the way and the kids you’d stop on the way. Great spot. Talk with your little girlfriend over a tangerine, you know…

Questions and discussion with the audience. 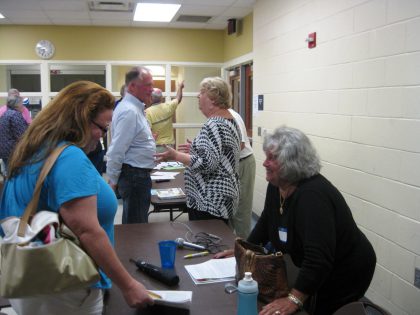 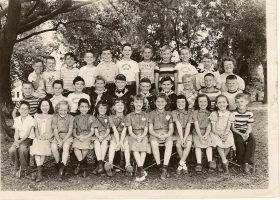 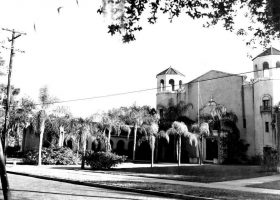 Concord Park Elementary School was located at the southeast corner of Colonial Drive and 441/OBT at 1010-1020 West Colonial Drive. Its western... 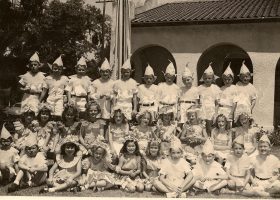 Mrs. Rosa Martin, handmade the flower May Day costumes for the first and second grade students at Concord Park Elementary School. The...

Grandfather and his free range chickens 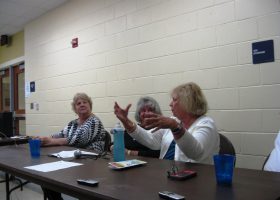 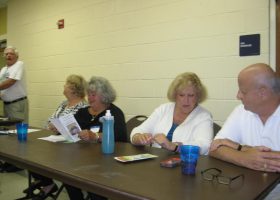 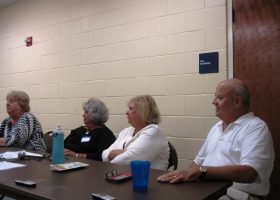 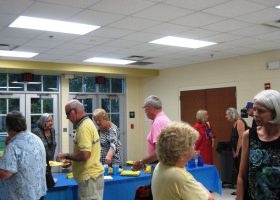 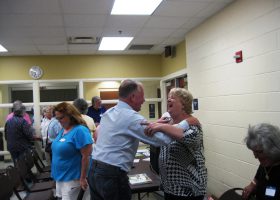 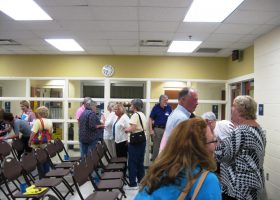