In October 1997 EPCOT hosted meet and greets with a number of Astronauts from Mercury to Space Shuttle and I met most of them!

It was great fun growing up in the 1960s as the country – through NASA – raced to achieve our slain President’s challenge to go to the moon and back before the end of the decade. The opportunity to meet astronauts who flew on Mercury, Apollo and Gemini as well as astronauts who had flown on the Shuttle and spent time on Skylab, but one I could not pass up. I took time off work and took my daughter out of school. It was that important to me.

The September 29, 1997 edition of the Orlando Sentinel described the Epcot Space Celebration:

“As Kennedy Space Center prepares its latest induction into the Astronaut Hall of Fame, Epcot is teaming up with NASA for an event of its own. The Epcot Space Celebration, to run Friday through Oct. 7, will feature a daily question-and-answer session with astronauts as well as displays and hands-on exhibits. The event will begin at 5:30 p.m. Friday, with a question-and-answer session featuring eight former astronauts, including Gene Cernan, Pete Conrad, Russell Schweickart and James McDivitt.

On the following days, some of the 30 participating astronauts will meet with visitors and sign books. Also, there will be exhibits such as a 330-pound space shuttle model made by a Boeing engineer. Children will be able to build their own model rockets.” 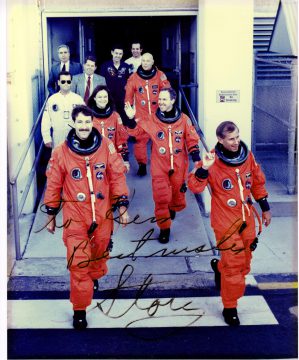 Story Musgrave, Space Shuttle Astronaut, was one of the NASA Astronauts who appeared at EPCOT on October 5, 1997. The photograph here is the “walk out photo” and I purchased it on the day of the launch of STS-80 on November 19, 1996. I viewed the launch from the NASA Causeway as I had requested PA PASS to see the launch in person. This was the last time Story Musgrave was allowed to fly in space. The trip was aboard the orbiter Columbia and ended up being the longest mission as the weather delayed landing for two days. The trip was from November 19 to December 7, 1996.

I brought this photo with me to the event at EPCOT in 1997 and asked Story to sign it in addition to the photo provided by EPCOT/NASA. The EPCOT staff member in charge of moving people through the autograph line, saw him sign my “walk out photo” and when he went to sign another, said there was only one autograph per person. I had mentioned to Story while he was autographing the first photo, that I had attended 35 Shuttle launches at the Cape. When the EPCOT staffer told me only one autograph, he turned to her and said: “This lady’s seen more launches than I have, I’m signing her photo.”

NASA forced Story to retire from flying on the Space Shuttle when he reached the age of 62 despite the fact that they allowed John Glenn to fly at the age of 77.

Mission STS-80 on Columbia was his last of six flights. This is from the Mission notes about the Crew: “On STS-80, Mission Specialist Story Musgrave will equal American astronaut John Young’s record of six space flights. At 61, he will be oldest human to fly in space. Musgrave has logged more than 858 hours in space on his previous five Space Shuttle missions. He has a doctorate in medicine and formerly worked as a surgeon, professor and researcher in the medical field. The former U.S. Marine is an accomplished pilot and parachutist. He was selected by NASA as a scientist-astronaut in 1967 and worked on the Skylab Program, among others, before becoming a Shuttle astronaut.”

Peruse images under Attachments below.

Click on first image to begin slide show. For a larger image, right click on an image in the slide show and select “Open Image in New Tab”, then use the magnifying glass to enlarge. 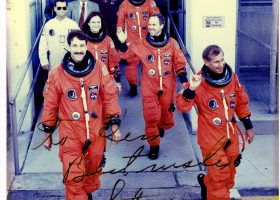 Story Musgrave, Space Shuttle Astronaut, was one of the NASA Astronauts who appeared at EPCOT on October 5, 1997. The photograph here... 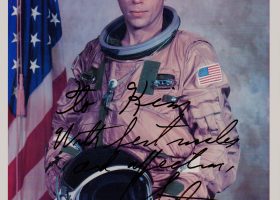 Story Musgrave, Space Shuttle Astronaut, was one of the NASA Astronauts who appeared at EPCOT in 1997. The photograph here is the...

Veteran NASA Astronaut Wally Schirra was one of the Astronauts who appeared at EPCOT in October 1997. This photograph is of my... 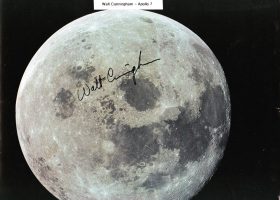 NASA Astronaut, Walt Cunningham who flew on Apollo 7 was one of the astronauts who appeared at EPCOT in October 1997. Astronaut Cunningham... 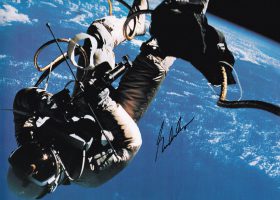 NASA Astronaut Ed Mitchell was one of the astronauts who appeared at EPCOT in October 1997. Ed Mitchell who flew on Apollo... 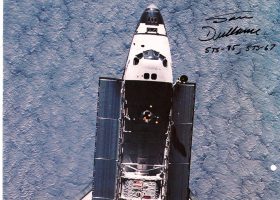 NASA Astronaut Sam Durrance who flew on STS 35 and STS 67, was one of the astronauts who appeared at EPCOT in... 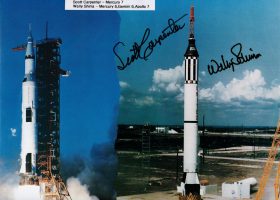 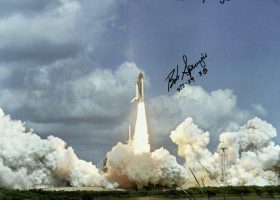 Autograph of retired Marine Corps Colonel and Astronaut Robert Springer. Colonel Springer was the guest speaker at an event in Altamonte Springs...