On May 15th, 2011 at the Investiture of Altar Servers, there were 111 total altar servers including 55 female servers led by Alyssa Brooks, the new Grand Knight, and Katie Wilkes, the new Knight Commander. 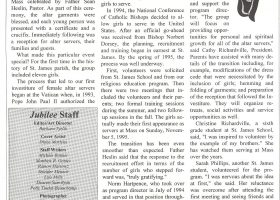 Article from Jubilee , the St. James Cathedral parish newsletter, February 1996, documenting the historic transition to include female altar servers at...

Born in Central Florida, Ben's earliest memory of the area is the fresh oranges his mother picked from a neighborhood orange grove. To this day, Ben still enjoys fresh homegrown oranges, they have a tree in their yard, and looks forward to the coming citrus season. A  true  Floridian, he enjoys the climate of the sunshine state and says, "I don't own a winter jacket and never will  if  I  stay here." He has been a member of St. James Cathedral since he was a baby and an altar server since the fourth grade. He says, "I feel like [St. James] has had a huge impact on my life. Without my faith I'd be a totally different person. It really helped establish my morals, my values, how I treat people..." Hear his memory of his St. James school kindergarten teacher Mrs. Burford and his experience of serving his community as a Grand Knight altar server at St. James Cathedral.

St. James Catholic Cathedral May 2011 Revelations newsletter featuring the graduating Knights of the Altar who have distinguished themselves by years of service to their church and the Orlando community: Bobby Burnes, Sarah Delahunty, Jose DeSantiago, Cameron Karaus, Bradley Metzger, Mallory Necrason, Ben Porter, and Judy Scharf.