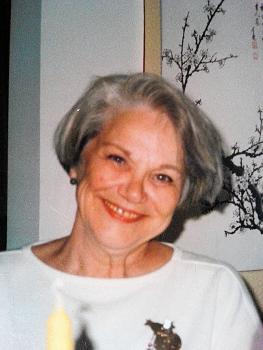 Jo Anne Feldstein, 88, who was hit and killed by an SUV last week after volunteering at the Orange County public library downtown, was a New York fashion model in the 1940s and ’50s and later became an addiction counselor.

Among her clients: author Truman Capote, according to friend Francoise Darcq.

“She was the smartest person I’ve ever known,” said Darcq, 73, Feldstein’s next-door neighbor in west Orange County and her friend for 53 years.

They met through a New York Times classified ad; Darcq was a native of France who had come to New York to work as a governess. Feldstein needed a French tutor for her son.

The older woman encouraged Darcq to try modeling and helped her get her first job in the industry — at a boutique in the Plaza Hotel.

It was Darcq’s job to lure customers into the store.

“I would go around to different restaurants within the lobby of the hotel, dressed in the most beautiful mink coats and jewelry,” she said.

Feldstein would sometimes show up, posing as a potential customer for fun, Darcq said.

“She would pretend to be a very wealthy person, and she would touch the fabric … and I would say, ‘Ma’am, you cannot touch what I’m wearing.’ She would say, ‘I beg your pardon. I could buy this hotel.’ … Whatever I was wearing would sell in no time.”

Feldstein grew up in Detroit, then moved to New York and had a long, successful modeling career, Darcq said.

“We did all the Seventh Avenue houses … every fashion week,” including Chanel, she said.

After Feldstein’s husband died, she moved to Missouri to be close to her brother, and when he died 10 years ago, she moved to west Orange County, into the house next door to Darcq.

She loved books and reading and volunteered every week at the library, helping in its third-floor bookstore, said Jane Poché, a member of the Friends of the Orange County Library System.

“She was such a dear friend,” Poché said. “It was such a tragedy. We’re all in shock from it.”

One day at the library a man exposed himself, said stepdaughter Joan DeSalvatore of Allentown, Penn.

“So Jo Anne walked up to him and said, ‘Put that away. Nobody wants to see your stuff.’ That was my stepmother.”

On the morning of the accident, Feldstein was in good spirits, Poché said. She worked about two hours then left, carrying a copy of “Paris Match,” a French magazine that she was taking home to Darcq.

She stepped into the crosswalk that’s in the middle of the block on Central Boulevard, near the front door of the library, and got about halfway to the center stripe, witnesses say.

That’s when she was struck by a silver SUV, a Toyota Highlander, driven by Jason Michael Schreiber, 28, of Indialantic, according to the Orlando Police Department.

Poché and others rushed outside.

“By the time I got out there, they were putting her in the ambulance. … They wouldn’t let me talk to her. They said it was a crime scene,” Poché said.

He was ticketed for failing to yield to a pedestrian in a crosswalk, according to a ticket on file at the Orange County Courthouse, but Orlando Police Officer James West filed paperwork, asking a hearing officer to dismiss the citation because of the likelihood of new or additional charges.

The traffic homicide squad of the Orlando Police Department is investigating.

A check of Schreiber’s Florida driving record shows that he has been ticketed for speeding four times since 2013. He also was convicted of drunk driving following a 2013 stop in Brevard County.

The crosswalk where Feldstein was struck is in the middle of the block, near the front door of the library and connecting it to a city parking garage.

It has no traffic light, just white paint on the pavement and a yellow crosswalk sign on the curb.
Poché and library system Director Mary Anne Hodel have asked the Police Department and city for a safety upgrade at the crosswalk.

In response, Police Chief John Mina wrote, “I know our traffic engineering department is exploring options to enhance driver awareness of the crosswalk.”

At Feldstein’s request, there are no plans for a funeral or memorial service, DeSalvatore said. 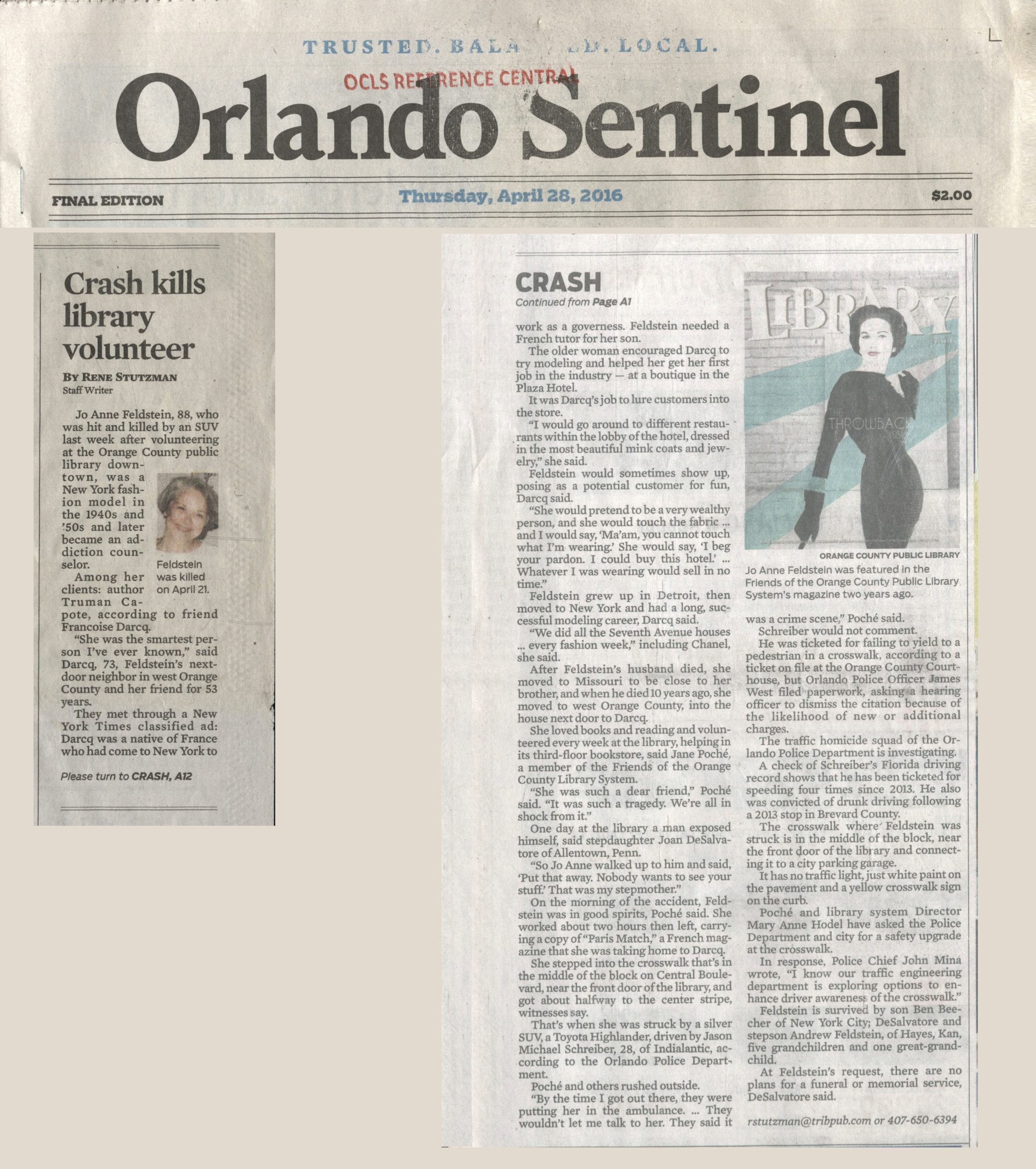 This article appeared in the Orlando Sentinel on April 28, 2016.