Central Florida resident Oliver Peters was Production Manager at WBRC-TV in Birmingham, Alabama, from 1982-1984. During that time, President Reagan encouraged local communities to create opportunities to connect unemployed citizens with companies in need of employees. WBRC-TV promoted/hosted a job fair that drew thousands of individuals, resulting in the employment of large numbers of people from around the Birmingham area.

President Reagan invited representatives from the events to a reception at the White House on April 21, 1983. Oliver Peters was chosen to represent WBRC-TV at the event in Washington, D.C., hosted by the President to recognize the television stations that participated in the job fair events.

The photo above was taken by White House staff as attendees met President Reagan. As you can see in the background, there are two military personnel. The first asked for your name, the organization you represented, and verified pronunciation of your name. He then passed that information to the military person standing next to the president who made the introduction to President Reagan. 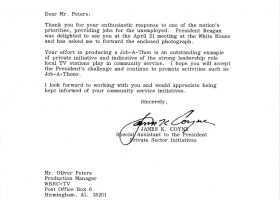 The photo of Oliver meeting President Reagan in April 1983 arrived at our home in May 1983 accompanied by this letter from...