From the autobiographical notes of Captain Charles Albertson with memories of his career in the New York City Police Department and his travels and adventures during his retirement beginning in 1905.

The vault was in the rear inside corner and consisted of a heavy brick and cement wall with a thick reinforced steel door. Within this vault was a large steel safe made with an outer and inner chilled steel plate one inch thick and eight or ten inches apart. The space between was filled with heavy steel railroad rails set up endwise and placed closely then poured full of wet Portland cement. 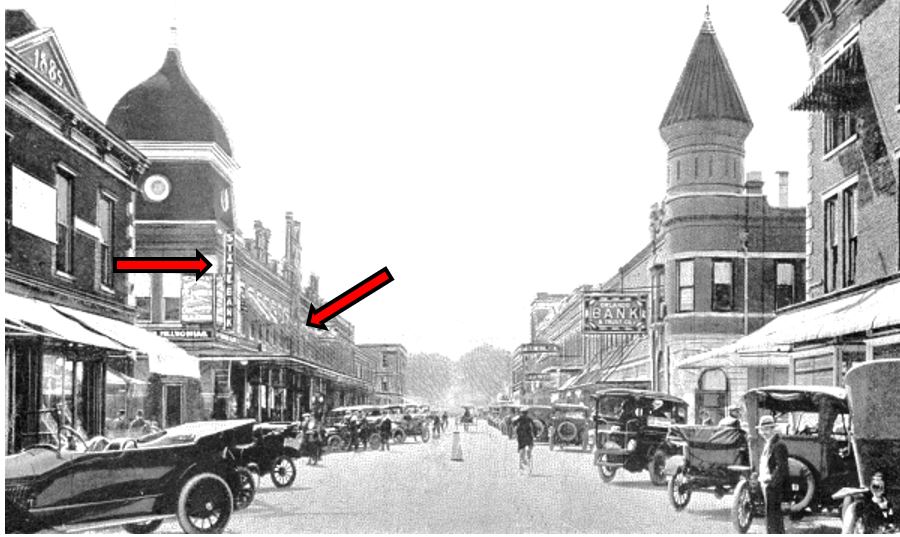 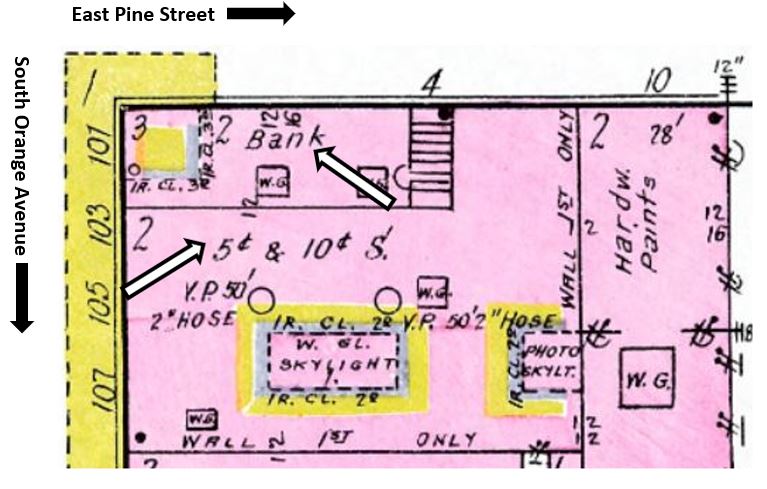 When the bank employees came one morning in January 1922, they found that burglars had drilled through the brick wall of the vault a hole large enough for a man to enter, and a suitcase was taken out and left in the ten cent store. This suitcase contained seven thousand dollars worth of diamonds. Between the steel safe and the wall of the vault there was a lot of space. I came in town in the afternoon and parked my car in front of the bank. The cashier called me in and we examined the bank and the ten cent store carefully. The burglars had detached an electric bulb in the store and attached a long, insulated wire with a bulb at the end to work down behind the counter. The first hole they drilled, they met with an obstruction. They were wrong in their measurements and lost a lot of time. The second effort was correct, but they wasted so much time in drilling or something scared them away. Among their equipment that they left behind was about three pounds of hard soap softened up a little. This was wrapped in a bath towel with a putty knife. 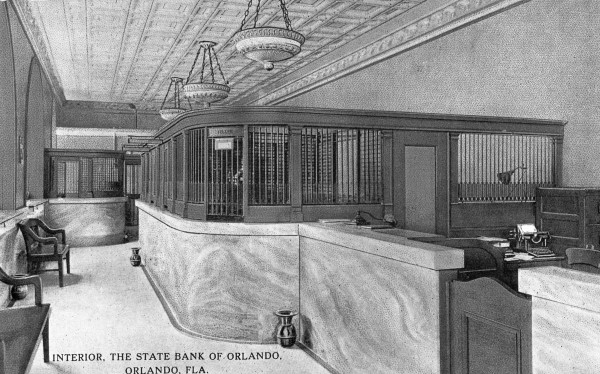 Old postcard shows the interior of the State Bank of Orlando at its location at 101 South Orange Avenue and East Pine Street. Captain Albertson indicated that the safe was on the back wall. Image provided by FloridaMemory.com and is in the public domain. http://www.floridamemory.com/items/show/145619

I went to police headquarters as I was well acquainted with the chief. When I arrived there, the chief introduced me to a detective – a member of Detective Burns’ staff – who had a contract to care for a number of the banks of this county. They were trying to solve the bank burglary. The chief insisted that they intended to drill into the safe by attaching a drill to the electric bulb. This would have been an utter impossibility for with an acetylene torch a man could not have obtained entrance in hours. I inquired if they had seen the soap. They said no and wanted to know what that had to do with the burglary. There was a safe in the office and I showed them how the thief closed the opening around the door of the safe with the soap and a putty knife and formed a little funnel out of the soap up at the top, to pour in the nitroglycerin and set it off with concussion and the deed is done.

There was in Orlando at the time a man from New York who understood this business thoroughly. He was what is known as the scout or advance man. He frequently came to my car and talked with me for a long time. He knew every crook in New York that I ever knew and a lot more. The second day after the burglary when in town, he came and stood close by me at the side of my car and talked about the burglary. When I requested to know if he had inspected the burglary, he said “No.” During a long conversation, I described some of it wrong intentionally [and] he corrected me each time. He knew much more of the detail than I did. I finally applied the supreme test. I said to him that whoever did the job were fools for the suitcase they brought from the vault and left in the ten cent store contained seven thousand dollars worth of diamonds. My companion was not a good actor. His lower jaw dropped five degrees. It nearly took his breath; seven thousand was quite a loss. I was unable to find any insulated wire in town the same as that used. One day, when I saw him in town, I went to his home and there in his barn or garage I found some wire the same as that found in the store. It had a peculiar look and evidently was used before to wire some building. On the clothesline were a number of bath towels, two of them like the one the soap was wrapped in.

When at headquarters, Burns’ man said to me “Which opening was made first?” I said that I believed the one that they could not succeed in getting through. It seemed to me, a strange question for a detective to ask. The men who committed this burglary must have had a large bottle of explosive, but it was never found. I cautioned them in the bank and store to be careful as I never knew of burglars taking away their explosive when not used, for if caught with it in their possession, no other evidence would be needed to convict. In this case it was never found. I have ever believed that some property was stolen from the bank that might have been traced, but perhaps not. If the truth were known, some old time bank burglar who had been serving a long term came out and visited his pal in Orlando. He was down and out and they tried the old method for they knew no other way.