Dr. Paul W. Wehr, historian and Professor of History Emeritus at University of Central Florida, discusses his new book: From Mosquito to Orange, the Making of a County, at the Pine Castle Historical Society Quarterly Meeting, June 26, 2016.

Dr. Wehr explains how he was able to research and document the history of Orange County from 1820 to 1892 despite the fact that the courthouse records were destroyed in the courthouse fire of 1868.

History of the Orange County Court House and other finds.

Shirley Cannon has been involved in the arts since moving to Orlando in 1962. She received a BA in Art and a Certificate in Community Art from UCF. She raised her six children in Pine Castle and became interested in history and folklore when she found that the area was the birthplace of Orlando, but that its important, history was in danger of being lost. She helped found Pioneer Days, and for many years served as Editor of their annual Pioneer Days Magazine, which published the stories and photos of its pioneer families. She served three terms as president of the Pine Castle Woman’s Club, whose members did much over the years to collect and preserve local history. She served as president of the statewide Florida Folklore Society, and served on the boards of both the Crealde and Maitland art centers. While a student at UCF she did an internship at the Zora Neale Hurston Museum, where she curated a major traveling exhibit on Zora. In 2014 she helped organize the Pine Castle Historical Society, which saved one of the few remaining historic country homes in Pine Castle and which is currently working to develop a local history center for South Orange County, the Pine Castle History Center. Shirley recently edited and designed a book by Dr. Paul W. Wehr, Dateline Pine Castle, which is based on articles written by Pine Castle founder, Will Wallace Harney, in the 1870s and 80s. She edited and designed Dr. Wehr’s most recent book: From Mosquito to Orange, the Making of a County.

Dr. Paul William Wehr was born on December 13, 1928 and passed away on March 19, 2021.
View a brief tribute from the Pine Castle Historical Society. 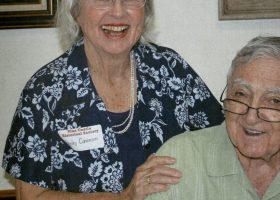