Missionary Computer Fellowship is featured in the book: Presbyterians: a spiritual journey by Dirk Wierenga.

Read more about the history of Missionary Computer Fellowship, the Lockheed Martin Engineers who volunteer, and the international and local organizations who have benefited from the technology and community giving. 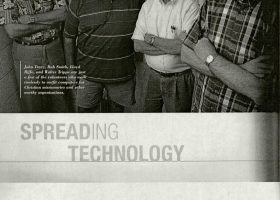 If your career was in the Defense or Aerospace business like ours, once you enter the world of retirement it is often difficult to assimilate with retirees from other professions. Top secret, secret, confidential, compartmentalized, black programs, missiles, fire control systems, lethality designs, state of the art advancement, etc. etc. - these are fairly unique background associations that limit our ability to share memories and experiences after we retire. But there are a few exceptions - one is that you continue to consult part time at the "Plant" or you become a volunteer along with other fellow retirees in REALM or some other non-defense related activity. Unfortunately there are not a large number of volunteer opportunities that we can share with others having our unique background. However there are at least two besides REALM which have attracted significant retiree participation from those of us that initially worked for Martin Marietta in Orlando before it became Lockheed Martin. One is the Orlando Science Center which attracts many of our retirees and the other is Missionary Computer Fellowship. Missionary Computer Fellowship (MCF) was conceived initially by George Wilson, a Data Systems Retiree, and then implemented in 1989 with major assistance from Walt Trippe (Missiles and Fire Control Systems Retiree). The initial focus was to develop unique software applications to support Christian missionaries at a point in time when the now ubiquitous personal computer (PC) usage was just emerging. The ministry was begun using a $5,000 grant from the G.T. Willey Foundation - Mr. Willey was the Martin Marietta Orlando General Manager in the 50's and 60's. George Wilson was a member of the First Presbyterian Church and arranged for them to provide the facilities and initial sponsorship for MCF. With the addition of fellow Marin retirees John Tracy, Larry Devine and Frank (Herb) Walker, the ministry quickly expanded to include the building and refurbishment of PC's, the development of a modified PC that would run directly off a car battery so that missionaries could operate the early PC's in the field, and the training of missionaries in the usage and maintenance of their PC's. Walt housed many of the missionaries in his own home while they were being trained....

Photo of some of the Lockheed Martin Volunteers at the Missionary Computer Fellowship office in downtown Orlando.