May 27, 1985 Orlando Sentinel article, Building For Future In Military Training Naval Center Could Spur Simulation-field Growth on the move of NTEC from the Naval Training Center to Central Florida Research Park and the importance of military business to Central Florida.

On April 25, the center marked a milestone that could have a lasting impact on Central Florida. A dedication ceremony held that day celebrated plans to build the first permanent home in the organization’s 44-year existence — a $23.5 million building in the Central Florida Research Park.

Construction will begin this summer, and occupancy is scheduled for 1987. The University of Central Florida encouraged the establishment of the facility by donating 40 acres in its adjacent research park. UCF also has established a simulation and training program. 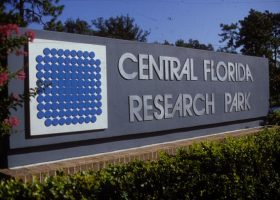