Growing up in Lakeland.
My father joined the company that was called the Mulberry Explosives Supply Company formed to serve the phosphate mines and saw mills. Well, they moved to Lakeland in 1925 in time for me to be born and changed the name to Mine & Mills Supply Company. My father ran the company for 47 years and I went on the board in 1965 when he passed away and am now chairman of that board. Amazingly, I’ve been on the board now for 47 years. The company was founded in 1909 and is now 103 years old….

It was an interesting life I lived there in a small town. Being raised by these two wonderful country people. They had come to town from the farm, but my father never left the farm. He had farms all of his life and spent half of every day during the summer when the days were long at the farm. He would come home from the office and change clothes and get his work clothes on and go out to take care of his cows and look over whatever was going on. My Uncle Etheridge farmed all of his life, my grandfather farmed all of his life. I was the first Handley to graduate from high school….

My father was in the Dixie Division formed up in Central Florida Companies B, C, and D. B being here in Orlando, Mayor Bill Beardall was the company commander of that company, and Captain Stikes down in Polk County formed Company D. My dad joined as a private, came back as a lieutenant and he wore his American Legion band the rest of his life in his lapel. He was buried with that pin in his lapel….

He always told me he’d rather be a lawyer than president of the United States; said, “Lawyers are independent. That’s the strength of our system, is having an independent bar, an independent group of lawyers.” And, he inspired me to go to law school… 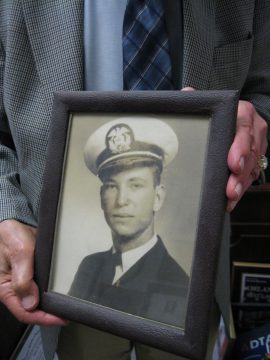 Photo of Leon H. Handley  taken at age 18 before going to sea to serve as a Merchant Marine in the United States Maritime Service.

The war was still on and every, every man expected to serve in the military. And I was not going to be drafted. I did not think that was, frankly, I didn’t think it was honorable to be drafted. I thought you ought to volunteer… I ended up in the Maritime Service, and then the Merchant Marines. I was a ship’s officer at 18. And I got to go to the Mediterranean delivering coal as a ship’s officer. During that trip I realized I was not going to be governor because I would not be a veteran and I could not imagine anyone being elected governor who wasn’t a veteran… 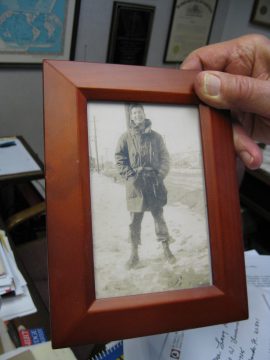 Photo of Mr. Leon H. Handley serving as Sergeant in the United States Army in Korea. 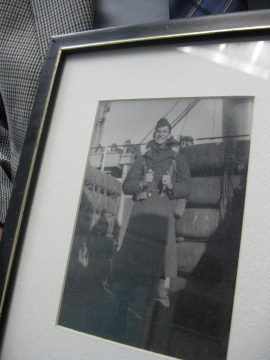 Photo of Leon H. Handley taken just after World War II when he was getting off the ship in Korea.

I had some GI Bill time left so I went into law school without really thinking much about practicing law… I went from having no job at graduation. I graduated in September which is an odd time to graduate, about 25 in my class. Joel Wells, whose father was a partner of Voorhis, Maguire, and Wells of Orlando, said that his uncle, Maxwell Wells, needed for someone to help Raymond Maguire, Jr. assisting him in trial practice. So I had met Mr. Wells in the summer of 49 when I was here in Orlando at summer ROTC Camp which was at the Air Force Base which later became The Naval Training Center which is now Baldwin Park.

I had dated Mr. Wells’ daughter, which was Joel junior’s cousin, and had a rather shaky time of it since I was driving Mr. Wells’ automobile, which had been given to him by the American Legion, him being the state commander, and someone unexpectedly stopped on a brick street and I slid into them crumpling the front end of Mr. Well’s American Legion company car.

So, he remembered me, and indeed, offered me a job….

Practicing Law in Florida.
First case I helped Mr. Maxwell with was a person who the doctor was testifying was in “terrible, terrible pain” and yet the nurse’s notes of the hospital record which I was reviewing there in the courtroom, essentially carrying Mr. Maxwell’s briefcase, talked about placebos, all the placebos. And I said, “Mr. Maxwell, placebos.” And his response, which was pretty typical of his personality, he was an Annapolis graduate…was a Rear Admiral in the Naval Reserve, and his remark was, “What the hell is a placebo?”And I explained it was a pink pill for pale people. And the doctor when confronted with the hospital record then confessed to the judge that he was talking about the wrong patient. The case ended right there….

As a consequence of my introduction to trial practice with Mr. Wells I was later hired by Mr. J. Thomas Gurney in what became the firm of Gurney, McDonald and Handley later Gurney, Gurney and Handley, later Gurney and Handley for 52 years. I was with that organization starting as the fourth partner with J. Thomas, J. Thomas, Jr. then Parker Lee McDonald being senior to me. Parker Lee later became chief justice of the Florida Supreme Court. And the two Gurney’s, father and son, name of the firm for many, many years until Tom Jr. withdrew and then later Mr. Gurney senior passed away. It was a great run. A wonderful association with three fine men and all the many, many fine lawyers who went through our finishing school, our post graduate course, and general practice, and in trial practice there’s been a dozen or so lawyers who went through, and many fine lawyers who went on to have great careers in the practice of law, some of whom are still practicing. I’m still practicing…. 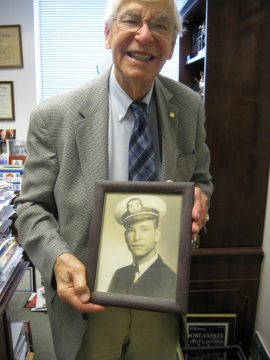 Church and Family Life.
In the process of living someone with a 50 pond head has said, “Through eight hours a day we make a living through the balance we make a life. And I was never able to make a living eight hours a day. I worked many, many, many, long hours sometimes all night. But that’s not all I did. In the process of being married to this wonderful lady, Mary Virginia Woolf, I was raised Baptist and she was born in the Presbyterian Church, so upon our marriage we compromised. I became Presbyterian and we’ve been compromising the same way ever since. We did have four wonderful children…. 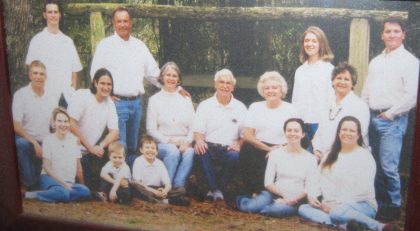 Mr. Leon H. Handley and his wife, Mary Virginia Handley, are pictured, center, with their family.

The family has been very, very important to me and part of my family obligation included participation in the First Presbyterian Church of Orlando. Mr. Newton P. Yowell, who had the largest department store in downtown Orlando, pioneer, took over twelve, twelve year old boys in 1906 and formed Yowell’s Young Presbyters. And they included such stellar persons as Chesley Magruder of the Magruder Foundation, T.G. Lee of the dairy, and Delaney Way, Sr. whose father was Mayor Sam Wiley and nine others. And Mr. Yowell formed this Sunday School class which continues today. I’ve been a teacher of the class, the plaque on the wall says since 1965. Actually, its, uh, considerably earlier that I was teaching there, for over 50 years and the class still meets today. It’s a remarkable institution. 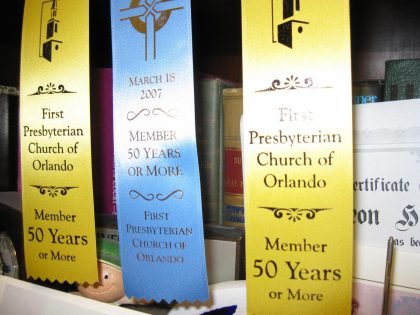 Ribbons of honor from First Presbyterian Church of Orlando to Mr. Leon Handley in recognition of faithful church membership for over 50 years.

Three members of the class, Mr. Lee and Mr. Magruder and Linton Allen, who founded the First National Bank of Orlando which is now part of SunTrust, three of them built the chapel for the First Presbyterian Church. Built it, furnished it, and presented it to the church debt free along with a fund to maintain. These three fine men remained members of that class until they passed away….

I’ve been interested in travel ever since having gone to the Mediterrean in the Merchant Marines. I’ve since been able to visit all 50 of the United States and 240 of the 315 destinations designated by The Travelers Century Club….

So my life has not been all work. In the process of it I’ve learned to love life and to consider myself the most fortunate person who ever lived. 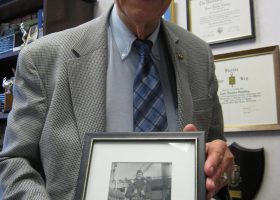 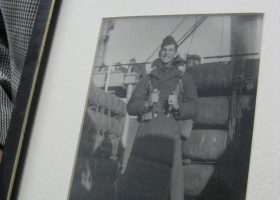 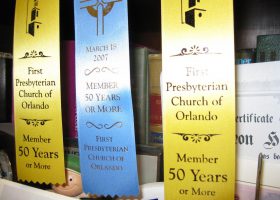 Ribbons of honor from First Presbyterian Church of Orlando to Mr. Leon Handley in recognition of faithful church membership for over 50... 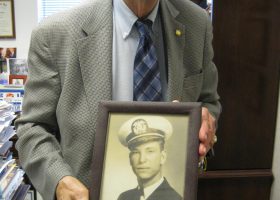 Photo of Florida native Mr. Leon H. Handley taken in his law office in downtown Orlando on December 11, 2012. He is holding... 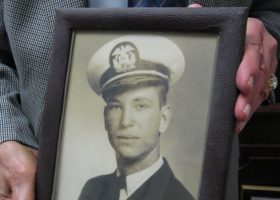 Photo of Florida native Mr. Leon H. Handley taken in his law office in downtown Orlando on December 11, 2012. He is... 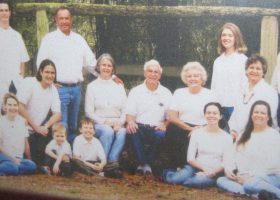 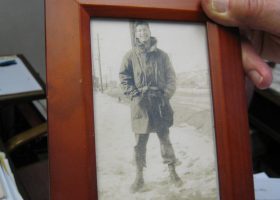