History of All Souls Catholic Cemetery

The property is purchased

The indenture for the purchase of the property on which All Souls Catholic Cemetery stands was signed by the Right Reverend John Moore, D.D., Catholic Bishop of St. Augustine and a representative of the Florida Land and Colonization Company Limited, on December 21, 1889. The 4 1/2 acres of land purchased for the Roman Catholic Cemetery and the parcel purchased in 1883 by the Sanford Cemetery Company, encompass lands that were part of Henry Sanford’s original property which he named “Belair.” This is born out in the location of the cemetery as inscribed on the plat for the property dated May 31, 1890. 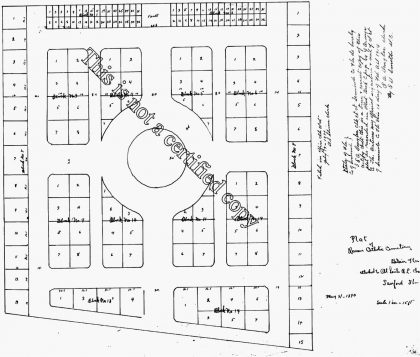 The “Plat of Roman Catholic Cemetery, Belair, Fla., attached to All Souls R. C. Church, Sanford, Fla. May 31, 1890” was filed in the office of the Clerk of the Circuit Court of Orange County on July 9, 1890 (Sanford was part of Orange County until Seminole County was formed on April 25, 1913). The same plat was certified by the new Seminole County Clerk of Court on February 13, 1914 (copy under Attachments below).

A letter from Father John A. Hennessy, Pastor of All Souls, dated February 29, 1924, entries in the church’s death records, and receipts from 1921 indicate the cemetery was once referred to as St. Callistus Catholic Cemetery. This name does not appear in local history books, city directories or in the files at the Diocesan Offices in St. Augustine or in Orlando, so it is unclear how it got that name.

All Souls Day Mass at the Cemetery

Sunday Bulletins from 1953 to 1968 indicate that it became a tradition during those years to celebrate Mass at the cemetery on the parish feast day – All Souls Day – for all the “souls” who had passed away. The first time appears to have been on November 2, 1955 as noted in the October 30, 1955 Sunday Bulletin announcement: “Masses on All Souls Day will be at 6:30 – 7:00 – 8:00 and 9:00 a.m. There will also be a Mass said in All Souls Catholic Cemetery at 9:00 a.m. Drive out West on 25th Street and turn in at the first red brick pillared gate of the City Cemetery. There will be no Communion given at the Mass in the Cemetery. You may go to Communion at Church.”

This tradition continues today, with the Pastor announcing the name of every parishioner who died during the year and a family member or another member of the parish placing a candle in front of the Calvary group monument for each of the departed.

In August 1987, Father Lyle Damen, Parochial Administrator, announced that all cemetery business would be handled by Mr. Ross Barrows, replacing  Mrs. Pat Tolle who had been handling cemetery business for several years. He also announced plans to improve the appearance of the cemetery. In October, the Men’s Club planted trees at the cemetery as part of the improvement plans.

In January 1988 a fence was installed. In February the Men’s Club members and other volunteers worked all day cleaning up the cemetery grounds. The few remaining lots in the old section at that time were only $350 each. In June 1988, Tom Otto was appointed Director of All Souls Cemetery. On July 1st, the cost of cemetery plots was increased to $550 and cremation spaces were $250.

In January 1989 Phillip Beasley took over as Cemetery Director. In September the Men’s Club once again sponsored a work day at the cemetery to get it in shape as it was too much for the church grounds keeper to manage by himself.

In May 1990, parishioner Dr. William Runge suggested that a special Memorial Day Mass be celebrated at the Cemetery the Sunday evening before the holiday. Father Burns commented on the event in the June 3, 1990 Sunday Bulletin: “A steady rain did not dampen the enthusiastic participation of the various branches of the military. At the conclusion of the Prayer of the Faithful, there was a moment of silence, followed by a gun salute and the playing of taps…” The Memorial Day Mass was repeated the following year with much better weather.

In October 1992, Father Richard Trout announced planning for the development and expansion of the parish cemetery as the developed section would soon be full. In the October 23, 1994 Sunday Bulletin, Father Trout addressed several issues concerning the cemetery:

“First, a word of thanks to grand Knight Larry Conniff and the members of the Knights of Columbus. The past two weekends they have spent clearing land and landscaping our cemetery… All this hard work is in preparation for All Souls Day, November 2. There will be two special celebrations on All Souls Day at our cemetery… 11:00 a.m. the Knights of Columbus will sponsor a dedication of the Tomb of the Unborn Child. Bishop Norbert Dorsey will be Guest of Honor along with many civic dignitaries… At 5:30 p.m., All Souls evening, we will celebrate Mass at the cemetery…” 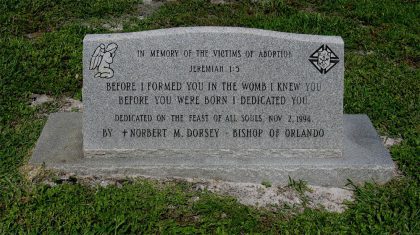 ABOVE: Photograph of the tombstone for the unborn victims of abortion sponsored by the Knights of Columbus and dedicated by Bishop Norbert M. Dorsey, CP in November 1994. Dedicated on the Feast of All Souls, Nov 2, 1994 by +Norbert M. Dorsey – Bishop of Orlando.

Tomb of the Unknown Child

An article in the November 11, 1994 Florida Catholic described the dedication of the Tomb of the Unknown Child: The November 2nd Feast of All Souls lifted memories “on angel’s wings” for mothers whose wombs become tombs because of the the scourge of abortion. A sunlit ceremony honored the souls of unborn children with a granite marker to heal heavy hearts. Bishop Norbert M. Dorsey, CP, dedicated a memorial tombstone to remember the ‘victims of our modern-day holocaust,’ with blessings for the children who never saw the sun. The memorial, which rests near the entrance at All Souls Catholic Cemetery in Sanford, was sponsored by the Knights of Columbus. “Every one of us is the son and daughter of the living God,” said the bishop. “That dignity also belongs to the unborn. This memorial will serve as a constant reminder for future generations that human life is sacred…” Eighth-grade students from All Souls Catholic School laid a wreath beside the tombstone…

Improvements to the Cemetery

Father Trout was actively involved in improving and expanding the cemetery. The October 15 and October 29 bulletins reveal some of his efforts: “November 2 is the Feast of All Souls and our parish Feast Day. Masses will be in the church at 8:00, 9:00, 12:10 and 5:00 p.m. at the cemetery. Following the cemetery Mass we will celebrate in the parish hall with a covered dish dinner and entertainment… Knights of Columbus will be sponsoring a cleanup day at the cemetery this Saturday. Please bring rakes and clippers to help with the work… The cemetery expansion is ongoing. You will notice all the pine trees have been removed and the new roads put in. Later irrigation will be installed with oak trees around the property. Cemetery plots will be available January of 1996.”

In July 1996, Father Trout reported on the progress at the cemetery: “We continue to do our land development at the cemetery. We will be putting in an irrigation system with trees and plants to follow.” Additional improvements were reported in October and November 1996: “Friday [October 25] we will all meet at the cemetery from 5 p.m.-7 p.m. to lay the new sod. If we are able to get them in time I would like 10 oak trees and about 30 Palatka holly bushes… if you would like to contribute a tree or bush, oaks are $50 and hollies are $30. Next Saturday two truckloads of sod are being delivered to our cemetery. We need strong arms to assist in the laying of the grass. Volunteers needed on Saturday, November 9th, starting at 7:00 a.m. we will start laying sod in the cemetery and we will work until the job is finished.”

In March 1997, Father Trout announced more improvements: “We are ready to pave the roads at the cemetery. New flowers are constantly being planted, trees trimmed…” The Parish Council voted to raise the price of a cemetery plot from $1000 to $1200 effective April 1st, 1997.

In April 2011, Mary Valente assumed responsibility for the cemetery and shortly thereafter, our insurance company gave notice that all ornamental items including any stone edging, rocks, etc. had to be removed from the grave sites. Since her appointment, a thorough survey of the cemetery was completed.

Though issues with vandalism have been infrequent, in March 2013 thieves stole many of the copper and bronze vases affixed to some of the grave markers. WESH-TV 2 interviewed Father Richard Voor at the cemetery on 25th street in Sanford who told the reporter that we pray for the thieves but hope God would touch their conscience and they would have a change of heart.

The cemetery is a special place of rest for Catholic loved ones and peace for those they have left behind. This image was taken by Anne Cammarata of All Souls Catholic Parish on All Souls Day, November 2, 2014. It was not retouched or adjusted in any way.

In 2022, Mary Valente, Director of Cemetery Operations, All Souls parishioner and photographer Dave Segber, and Beatriz Atorresagasti, publisher of the Sunday Bulletins for All Souls Catholic Church, worked together to create a three panel tribute to all the veterans interred in the cemetery. Read more about their efforts and view images of the gravestones.

READ ABOUT ALL SOULS CATHOLIC PARISH

READ ABOUT ALL SOULS CATHOLIC SCHOOL 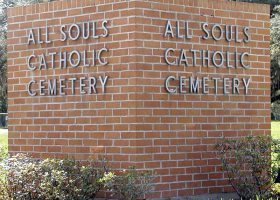 The entrance sign to All Souls Catholic Cemetery in Sanford, Florida on 25th Street. The land for the cemetery was purchased by Bishop... 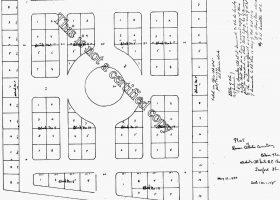 Plat of Roman Catholic Cemetery, Belair Florida attached to All Souls R.C. Church, Sanford, Fla. May 31, 1890, filed in the Office... 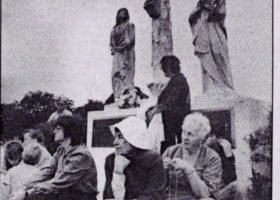 The November 7, 1986 edition of the Florida Catholic featured this photo of parishioners sitting beneath the Calvary monument during prayers and... 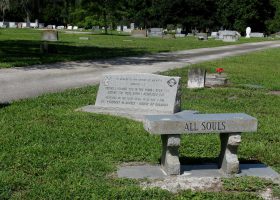 Photograph near the entrance to All Souls Catholic Cemetery in Sanford, Florida on 25th near 17-92. Memorial to "all souls" is near... 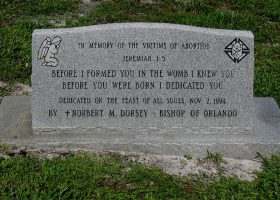 All Souls Catholic Cemetery - Tombstone for the Unborn

Photograph of the tombstone for the unborn victims of abortion sponsored by the Knights of Columbus and dedicated by Bishop Norbert M.... 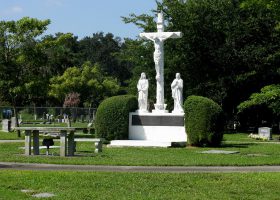 Photograph of All Souls Catholic Cemetery with the Calvary monument and altar in view. The Calvary group was installed and dedicated in...

Photograph of the Calvary group monument installed October 1966 at All Souls Catholic Cemetery in Sanford, taken by Anne Cammarata of All... 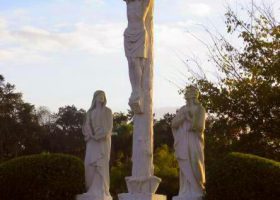 The Calvary Monument installed and dedicated at All Souls Catholic Cemetery in October 1966. To enlarge images, right click and save to your...

This list of Priest and Deacons who have served the parishioners of All Souls Catholic parish is a work in progress. As additional information and facts are discovered, the information contained in this list is updated.

Indenture between Bishop John Moore and the Florida Land and Colonization Company, Limited, dated December 21, 1889 for the plot of land on which the All Souls Catholic Cemetery is located.

A 12-foot tall memorial entitled "Calvary" was installed at All Souls Cemetery in 1966.

The "Plat of Roman Catholic Cemetery, Belair, Fla. attached to All Souls R. C. Church Sanford, Fla." was completed on May 31, 1890 and filed with the Clerk of the Circuit Court in Orange County on July 9, 1890.

Articles  published in the November 11, 1994 edition of the Florida Catholic on the dedication of a memorial marker for the "Victims of Abortion" located near the entrance of the All Souls Catholic Cemetery in Sanford, Florida on 25th Street near 17-92. The marker was sponsored by the Knights of Columbus and dedicated on All Souls Day, November 2, 1994, by Bishopn Norbert M. Dorsey, CP.

WESH-TV Channel 2 News reported the thefts and interviewed then pastor, Father Richard Voor at the cemetery.

Comments to “All Souls Catholic Cemetery”