The Lake Concord/Adair area of College Park was the subject of a 1984 Historic Resources Survey conducted for the City of Orlando. In 1989, College Park Neighborhood Association Historical Committee volunteers supplemented the survey. The committee continues to gather data. This History Handout shares the information compiled, with area history, descriptions of the six tour homes, and capsule descriptions of other houses that line the area’s brick streets.

For many years after the settlement of Orlando, the southwestern section of today’s College Park was mostly orange groves and oaks, with few houses. In 1878 real estate investor James P. Wilcox bought 70 acres of this land. Much of his purchase was acquired in 1910 by Orlando pioneer Thomas P. Warlow and his associates, who created the Concord Park subdivisions near Lake Concord. In 1917 adjoining property was sold by Wilcox’s heirs to F.N. Boardman. In 1919, 21 and 22, Boardman acquired additional pieces from T.H. Evans of Concord Park, the City and the Wilcoxes. He built a house and subdivided, creating BOARDMAN’S ADDITION in 1922.

Land north of the Wilcox purchase had been bought in 1875 by Adam Given. In 1922, as the Florida land boom took off, a tract near Lake Adair was platted as the Edgewater Subdivision by T.J. Walker, owner since 1906. It was sold in 1923 to the Gentile Brothers Company, dealers in fruit and other commodities. They replatted the land in 1924 as EDGEWATER HEIGHTS. Bought later in 1924 by F.H. Thwing and Thomas H. Smith, the subdivision was promoted by the J.P. Holbrook Company. Holbrook described the area as a “combination of lakes, rolling high land, fine homes, broad streets, avenues of splendid trees, orange groves, a Country Club at the side door and a place close in to the heart of town.” Some 20 homes were built here before the end of the boom and the onset of the Depression almost halted construction. Afterward, development proceeded at a slower pace, so that Edgewater Heights today contains homes from the 1930’s, 40’s, and 50’s, with a few homes from the 1960’s, 70’s, and 80’s and even the 1990’s. There is still potential for development through demolition of older homes and subdivision of large lots.

Between Edgewater Heights and Boardman’s property, 15 acres remained undeveloped and fenced. This land, owned by Englishman Henry B. Sweetapple and his heirs, was actively maintained as an orange grove from 1885 till 1936. In 1944 Sweetapple’s grandson Harry Hammond sold the land to Donald L. and Justine M. Dudley. In 1945 they subdivided it as EDGEWATER ESTATES, with a street called “Alba” (white in Spanish), after their friend and co-developer Dr. Roland White; their daughter lives on Alba Drive now. Austin Wigglesworth also participated in the development, which included land on Lake Concord owned by Dudley. He gave it to the City and now, as Don Dudley Park, it combines with Alba’s oak trees to enhance the area. 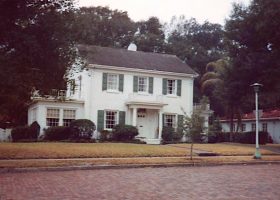 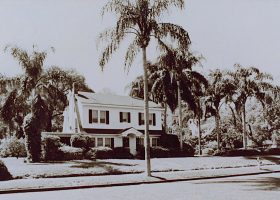 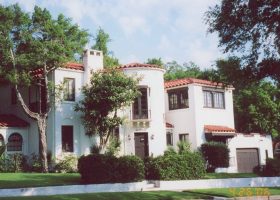 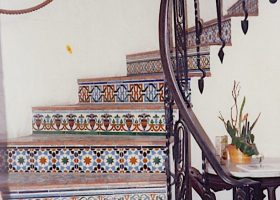