The Star Trek experience was located in the New York area near Kongfrontation. It opened in 1992 (some sources say March 1991) and closed in 1996 (November 11, 1996). It allowed paying guests to take part in a 10-minute Star Trek episode performed in front of a blue screen in costumes and ears (if you were a Vulcan). At the end of the adventure, guests received the video of their experience for $29.95 plus tax.

The gift shop was one of our favorite places to shop. As a child of the sixties, I grew up with Star Trek and introduced my kids to reruns in the 1980s when they were still in diapers. When my daughter saw the Star Trek costumes in the gift shop, she had to have one, but the price was unreal! We opted for just the shirt (which was about $30!) and put the rest together ourselves. This is Ashley Peters sporting her Next Generation outfit replete with phaser!

Prior to the opening of the Star Trek Adventure, the storefront posted a multi-screen preview center. My husband and Ashley’s Dad – Oliver Peters was a video editor for Century III Teleproductions located on the backlot at Universal Studios at the time and created the video that ran on the screens. The location of the Star Trek attraction marks the spot where we met one of the most influential men in Hollywood.

My husband, Oliver Peters, and I (Kim Peters) were among the guests at the grand opening ceremonies for Universal Studios in June 1990 (on or before the opening on June 7, 1990). After enjoying the opening ceremonies featuring Michael J. Fox, Sylvester Stalone, among others, my husband took me on a tour of the park. We greeted “Coach” stars Craig T. Nelson and Jerry Van Dyke who were absolutely crazy but quite nice – stopping to have their photos made with folks, hugging the ladies and planting a kiss or two. We avoided that area and headed for the future Star Trek attraction so I could see this video wall that he had been working on for days and nights before the opening. As we approached, we noticed two people viewing the video wall. The Universal Studios representative recognized my husband and introduced us to would you believe — Steven Spielberg. Apparently he was impressed with the work Oliver had done on the video wall. Mr. Spielberg greeted us and shook our hands. He was kind and gracious. What a night! 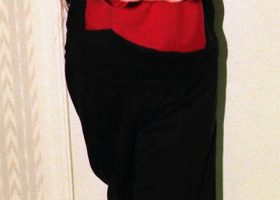 The Star Trek experience at Universal Studios opened in 1992. We never paid to perform on the Enterprise, but we loved the... 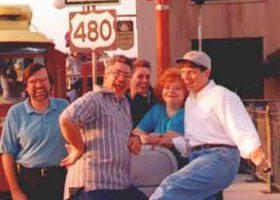 Mardi Gras at Universal Studios is certainly the family version and I liked it that way, especially after a true Cajun from...