The plaque at the base of the flag states that it was given to Charles W. Scott Col. USAF Ret upon release as an Iranian hostage. January 25th, 1982. Colonel Scott published a book entitled “Pieces of the Game: The Human Drama of Americans Held Hostage in Iran.

Back to top
TAGS: Art in the Library, Charles W. Scott, daughters of the american revolution, Iranian hostage, Orlando Public Library, Pieces of the Game
ATTACHMENTS 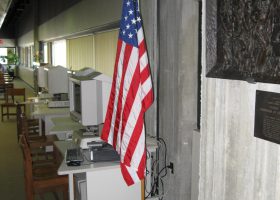