Mrs. Nils M. Schweizer and Architect Jerry Uhran were the Special Guest Speakers at the Orlando Remembered meeting on January 15, 2020 in the Melrose Center at the Orlando Public Library.

Mrs. Schweizer is the widow of Architect Nils M. Schweizer whose firm designed the addition to the Orlando Public Library. Mr. Schweizer’s architectural design is reflected in buildings throughout Central Florida such as Florida Southern College in Lakeland, Orlando International Airport, Epcot Center’s Mexican pavilion, Loch Haven Park and St. Luke’s Episcopal Cathedral in downtown Orlando. Mr. and Mrs. Schweizer are a founding family in the Kairos Prison ministry and worked together for the betterment of humanity.

I find it fascinating to come and stand in front of this picture because I have two wonderful memories. One was when the powers that be in Orlando were going to build a City Hall and they were going to Miami to find an architect. Well, the local architects here thought that wasn’t really quite fair. So they, and Nils was kind of the head of this thing, they said “Let’s invite really outstanding architects to come to Orlando and design buildings here.” Because he felt Orlando, and this was before Disney, he felt Orlando was going to be the hub of Central Florida certainly, and maybe all of Florida.

So John Johansen was one of the gentleman that came and Brutalism isn’t that what they called it? So when the first wall was poured they pulled up the batten board, you know everybody was holding their breath to be sure it was going to stand. And it has stood the test of time, that’s for sure. And then many years later, Nils firm did the renovation and it sort of is the tail that wagged the dog because it’s so much bigger than the original building.

But we were here late, late, late one night just outside because a cousin of mine was in town and we were showing him things that were important in Orlando. Well, there were two young men standing outside looking at this building and they were in their late teens, early 20s, and they were talking to them. They were about to join – at that time you didn’t enlist, you were drafted- and they were leaving in the morning to go into the armed forces. And the fact was they chose to spend their last night looking at buildings because they felt, both of them were really interested in construction, architecture. And I think of that often. It’s your last night of freedom and you’re looking at a building. That says something about your devotion.

This building certainly has changed the intensity of what a library can do. I remember the first librarian, Clara Wendel, they had a party with John Johansen and they were going to go to the University Club and Clara couldn’t go because women weren’t allowed in The University Club. So you can see the effect a building can have and you know it’s scary to think of how we’ve become such a tear down and rebuild generation. And if you think of all the incredible knowledge. And if you look at in Europe, they revere their places and we are pretty much a throw-away generation. But, I think, the Brutalism of this building is going to make its stand for a long time. So I am really, really happy to be here.

I‘ll tell you a few stories because Frank Lloyd Wright certainly is a name that will be remembered for a long time. And as Jerry said, when Nils Schweizer went into the Army he was going to become a minister. He was planning to be a Presbyterian minister. But his last days, it wasn’t here, it was in Maryland, he chose to go up and look at Fallingwater. And at that time it was closed because it was during the war and everything was kind of closed. But he walked up the river so that his first view of Fallingwater was the one we see in all the pictures, water falling over the lake. And I think it’s interesting that that would be one of the last places – he wasn’t planning to become an architect at that point, but he was fascinated by the whole idea.

Nils father, his parents were from Switzerland, and Dr. Schweizer would take Nils and his brothers as they got older, they lived in Maryland, but they would go down to Washington, D.C. and go to one of the art museums. And they would study one picture. You know when we go to a museum we go through and we see as much as we can. But Dr. Schweizer thought it was important to teach the boys how to look at the individual and get the essence of what the artist was trying to do. So I think that also is something we’ve lost. We’ve lost the ability to study. The input of everything. You turn on television and it’s just there. There’s noise, there’s information just surrounding us all the time. And it’s important to stop and take a breath and really study things.

Well, so Nils was familiar with Frank Lloyd Wright and during the war he had – he had an experience that changed his life. He was on the liberating force for Birkenau. We were married 33 years and only one time did he talk about it. It was something, he said, “In order to survive he had to pull a curtain down and not let it up because they were walking as they approached the camp, there were frozen bodies as high as a man on both sides of the road.” And he said, “The men that came out of there, they weren’t even human. They were so emaciated.” And so, that changed his life. He felt he was not equipped to be a minister in the Presbyterian Church. He wanted to do something else. He wanted to do something that built up the world that he had seen so shattered in Europe.

As I said, I have the telegram at home, it says: “Come Ahead” – Frank Llyod Wright. So he went to Taliesin and worked there with Mr. Wright for nine years and during a large part of that time, he was sent to Florida to Florida Southern College where Mr. Wright was. And Dr. Spivey, he was an amazing man too, because he had the vision to build something that would last rather than bricks and mortar that we think of with vines, our idea of a college. He wanted something totally different. So I met Nils because I was a student at Florida Southern and while we there we were married. And six weeks after we were married Mr. Wright was coming…

When Mr. Wright died, Nils went to Taliesin to ask them to advance the buildings that had been done for Florida Southern because the college had grown so, particularly after the second World War. They needed something that was larger than the original drawings that Mr. Wright had made. At Taliesin Mrs. Wright ruled the roost and she was not allowing any change to anything Mr. Wright had done. So it didn’t make sense to build a building that was going to be too small before it even got started. So that’s when Nils did a lot of the buildings at Florida Southern. And that was really special in that he had been there as Wright’s representative.

In Orlando, we came here in ’55 and loved being in Central Florida ever since. I’m trying to think of a few stories to share. The airport, when we were building that, you all remember it? That’s what’s wonderful about this group because there’s enough time represented here we remember how exciting it was to be building a destination airport! And to see Orlando growing! And we also, it makes us sad at the same time because it is… everything is just growing so rapidly and so fantastically. It’s positive and negative all at the same time… It’s just amazing to see what’s happening.

But it’s so important that we save some of the wonderful things that we have. We are in a building right now that says that. It’s important that we maintain our touch with the past. And you know, to know nothing of the past is to understand little of the present and have no conception of the future. That was written in my world history book and I thought it was really important to know that. 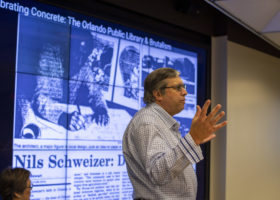 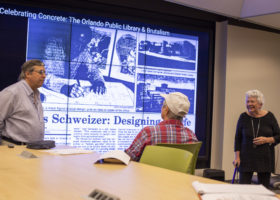 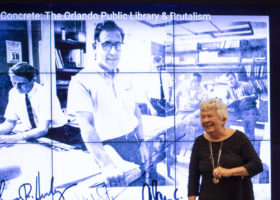 Mrs. Nils Schweizer standing in front of an image of her husband, Architect Nils M. Schweizer, in the Melrose Center at the... 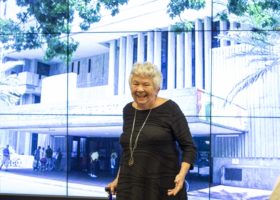 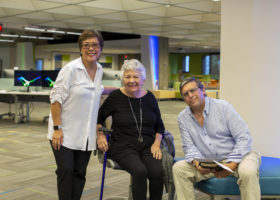 Mrs. Nils Schweizer, center, and Mr. and Mrs. Jerry Uhran at the Orlando Remembered meeting, January 15, 2020 in the Melrose Center...

There are currently no video related to this memory.
Mrs. Nils M. Schweizer and Architect Jerry Uhran Special Guest Speakers at Orlando Remembered, January 2020, Pt. I of IV