The Orlando Public Library at Ten North Rosalind was dedicated on Sunday afternoon, August 7, 1966. Mayor Robert S. Carr cut the ribbon and presented the building to the people of Orlando. The dedication, at 2 p.m., was followed by an open house hosted by members of the Friends of the Library with music provided by Orlando Local 389 of the American Federation of Musicians.

Two years in the making

Your New Library — Be Proud of It!

The August 6th Orlando Sentinel article “Your New Library — Be Proud of It!” announced the opening:

It’s beautiful! And it’s yours! The new Orlando Public Library, that is, at Ten North Rosalind Avenue, and it opens for business Monday morning, following a dedication ceremony and Open House Sunday afternoon. To which you,  you, and you are invited… “Books are our business” is the motto of Director Clara Wendel and her staff of 100 full-time and part-time coworkers, and everything has been geared to develop this business for your enjoyment and pleasure — the more business the happier these folks are.

It continues to describe the new library’s interior space, resources and staff in vivid detail, including the “cave-like book delivery service elevator into which one just rolls the whole book truck with its load for other floors, [and] the concrete walls, interior supports and balconies, which convey the feeling of permanence and medieval strength.”

An editorial in the Orlando Evening Star on Monday, August 8th, under the banner “Orlando’s Library Opens,” speaks of the impressive $1.7 million library’s brutalist architecture.

To some the building is not an object of beauty — its concrete walls appear pitted, but that’s the way it was planned.

“It will grow on you,” said C. DeWitt Miller, president of the library  board.
“It’s a landmark,” said James Deen, president of Florida’s architects group.
“It will make Orlando famous,” the Miami architect said after an inspection.

The brochure created for the dedication is jam packed with information on the building’s construction, capacities and costs.

It lists all the architects, consultants, contractors, sub-contractors, building materials suppliers, landscapers, and suppliers of furnishings! In addition, the dedication booklet lists the Orlando City Council, Library Board, Orange County Commissioners and the County Library Advisory Committee members, and the Friends of the Library members who contributed to the purchase of the six-person listening station for the library. Lt. Colonel and Mrs. [Dorothy] H. Bascomb Melrose, in whose memory, the Dorothy Lumley Melrose Center for Technology, Innovation and Creativity is named, are listed as contributors.

Read more about the History of the Orange County Library System.

View the images and documents below. 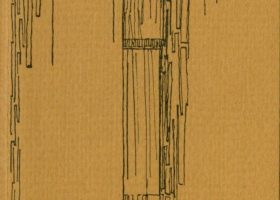 Brochure cover for the Dedication of the Orlando Public Library on August 7, 1966. 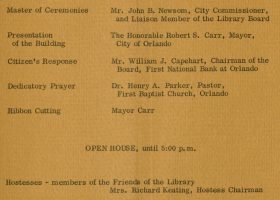 The Dedication Ceremony for the opening of the Orlando Public Library August 7, 1966. 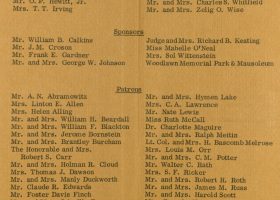 Friends of the Library contributors

List of the Friends of the Library who contributed to the purchase of a six-person listening center to allow patrons to listen... 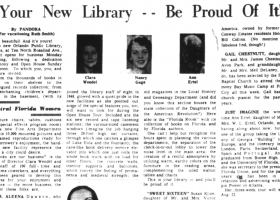 Your New Library -- Be proud of it!

Orlando Sentinel, Friday or Saturday, August 5th or 6th. No page number on microfilm; precedes the front page of the August 6th... 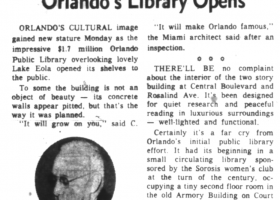 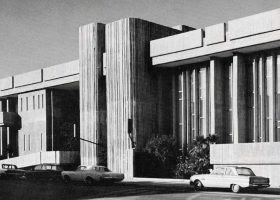 Brochure for the Dedication of the Orlando Public Library on August 7, 1966.

Reports the progress on the new building and completion date.

Reports the opening of the new Orlando Public Library.

1966-Friends-contributors.pdf
Friends of the Library Contributors

Friends of the Library members who contributed to the purchase of the six-person listening station for the new library, including the parents of Mr. Ken Melrose.