We were living in Daytona before my husband was drafted and we had to use a room that was blacked out because we feared the enemy could see the slightest twinkle of light… Then I remember I stood on the beach and I looked out over the ocean and I said what a beautiful scenery it is and then I would look down and I could see the oil all around my toes. And I realized that there were ships having been blown up very close to shore. It was such a rude awakening. Those were serious memories.

Orlando centenarian Myrtle Skop Rutberg shares her memories of WWI, the Great Depression, WWII, and celebrating her 100th birthday at the synagogue on September 17th 2011. Her parents moved in 1904 from their shtetl in Poland and arrived in New York City on the 4th of July with the fireworks. She says, “I treasure everything about living in the United States.” Hear Myrtle Skop Rutberg, a living source of history, in this from her oral history interview on January 3rd, 2012. 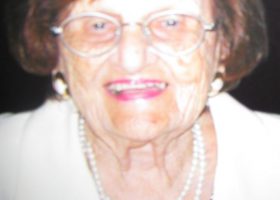