ABOVE: “A new, ecclesiastical look is given the downtown Orlando skyline with completion of St. James Roman Catholic Church.” Illustration caption, Orlando Sentinel-Star, page 35, section 4, March 9, 1952.  Newspaper article announcing a new era for St. James Roman Catholic Church, “a monument to the faith of its founders and a magnificent addition to the busiest street in Orlando.”

The cornerstone of the first Orange Avenue church was laid in 1888 by Father Swembergh. The new church was dedicated on March 9, 1952.

St. James Roman Catholic Church, now known as Saint James Catholic Cathedral, the mother church of the diocese, is located on the corner of Orange Ave. and Robinson St. in downtown Orlando.

In 1978 downtown Orlando consisted of empty storefronts and an economic recession darkened the nation. It was at this critical point in the history of Orlando that Father David Page of St. James Cathedral envisioned expanding the church at the corner of Orange Avenue and Jefferson Street. Fr. Page, a community builder, wanted to create a gathering place for community life and social functions. He wanted people to feel connected to their community parish. Tom Wilkes, a parishioner of St. James Cathedral, arrived at St. James just weeks before the church rectory was demolished to make room for the Community Life Center. He details the church’s contribution to the city beautiful in this excerpt from an oral history interview on March 26, 2011. 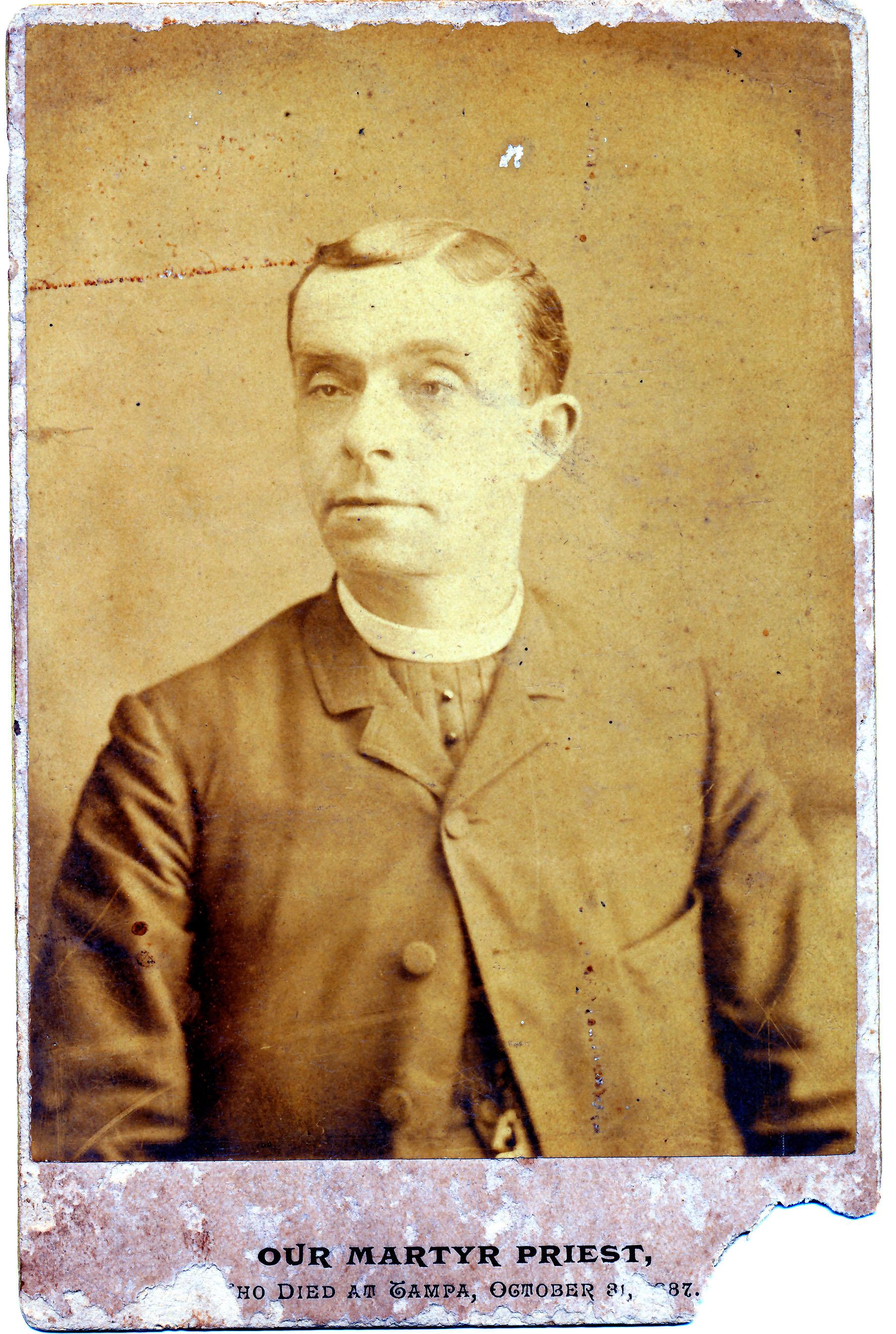 Photograph affixed to card with this inscription: Our Martyr Priest who died in Tampa, October 31, 1887. From the Mahoney Collection donated to the Archives of the Diocese of Orlando on Nov. 5, 2014, by Alice Teslo.

Rev. Felix Prosper Swembergh was born June 2, 1845 in Cassel, France where his early life was spent among the Flemish people … [H]e graduated [from Colonial Seminary of the Holy Cross in Paris] in August 1865. He next moved to America to the Vicariate apostolic of Kansas…. On June 29, 1868, [he] was ordained a Priest. In July 1869, he was transferred to Solomon City to provide service to … remote settlements of the Kansas frontier west of Abilene…. Historical accounts credit him as being the first minister of any denomination to preach the gospel to the Native Americans of that region…. When Father Felix Swembergh relocated to Orange County in 1885, he became Orlando’s first resident priest…. Bishop Moore asked him to immediately begin building [a church] in Orlando [and] start work on a church in Sanford…. In the meantime, he held Catholic Mass every first and third Sunday at Doyle’s Hall, near the wharf in Sanford … [He endorsed] a Roman Catholic colony known as St. Joseph’s Colony west of Sanford…. In May 1887, yellow fever broke out in Tampa … [and] on October 23rd, Bishop Moore … sent Father Swembergh [to Tampa] to care for [Rev. Peterman] but [Rev. Peterman] passed away on Oct. 27th…. Father Swembergh fell victim to the dreaded disease…. Father Clavreul … arrived in Tampa on Oct. 31st and … [and] that night at nine thirty, Father Felix Swembergh passed away. Source: Father Felix Prosper Swembergh Biographical Reference Paper, Christine Kinlaw-Best and Charlie C. Carlson, 1999, Sanford Museum.

On July 4, 1887, Father Swembergh, beloved by the Catholics in Sanford, conducted a ceremony as part of the city’s 4th of July celebration that drew crowds from as far north as Jacksonville. The Daily Journal, Sanford, Florida, Tuesday, July 5, 1887, p. 2, column 1, reports it thusly:

The corner stone of the Catholic church on Oak avenue, between Eighth and Ninth street was laid yesterday at 13:30 p.m., by Rev. Felix P. Swembergh in the presence of the Catholic congregation. The stone is of pure marble and bears the inscription “I.H.S.” which means, “Jesus Savior of Men.” Rev. F. P.

Swembergh, dressed in a beautiful cape, and assisted by two altar boys, read the prayers prescribed the Roman ritual, which consist principally in pslams [sic] taken from those of King David and orations made by the church. Having marked the sign of the cross three times up on the stone, the Rev. Father blessed and laid it in cement in its place.

He then delivered a short address in which he pointed out to his hearers the meaning of the ceremony which had just taken place. This new building, he said, would be another representative of that great and ancient institution which for eighteen centuries had done battle for God, and worked for the salvation of souls. It was not a mere meeting house where people would congregate to sing the praises of God, to listen to the teachings of the gospel, or to pray to the loving God, but it was more than that, it would be the dwelling, the tabernacle of God; for a Catholic church was built to meet the practical consequence of the belief of the real presence of Christ in the sacrament; it would be the home upon earth of Him who said: “My delights are to be with the children of men.” Building, therefore, not for men, but for God, it was natural that every sacrifice should be made to beautify the house of God, that, having assisted in adorning the home of God upon earth, we at our turn might be admitted to the home of God in heaven.

The congregation was then dismissed and went to swell the throng of people who had come to Sanford to celebrate the Fourth. 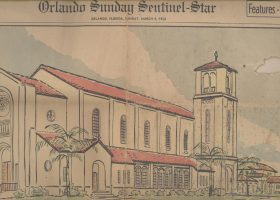 "A new ecclesiastical look is given the downtown Orlando skyline with completion of St. James Roman Catholic Church." March 9, 1952, Orlando... 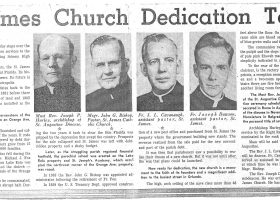 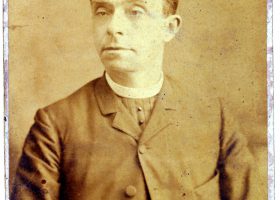 Photograph affixed to card with this inscription: Our Martyr Priest who died in Tampa, October 31, 1887. From the Mahoney Collection donated...