Martin Andersen, publisher of the Orlando Sentinel, and his wife Gracia Barr Andersen discuss their lives in Orlando.

This interview was conducted in the Andersen home on April 9, 1975 for the Friends of the Orlando Public Library’s Oral History Committee by Jean Yothers.  We are grateful for the Orange County Regional History Center‘s making this recording available for Orlando Memory.

Peruse a collage of images of various periods in Mr Andersen’s adult life comes from an article printed in the Orlando Sentinel on May 5, 1986 titled: “Orlando leader Martin Andersen dies.” This article and more with other images may be found at the Orlando Public Library in the biography vertical files. 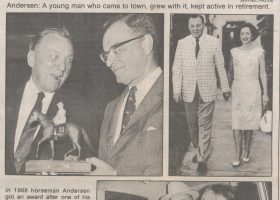 Martin Andersen: Through the Years

This collage of images of various periods in Mr Andersen's adult life comes from an article printed in the Orlando Sentinel on...