Footnotes was a monthly publication presenting “Items of interest from the Orlando Public Library and Orange County Library System.” Items of interest included news about library services, branches, staff and volunteers, along with a calendar of events at the Main library. We are not sure when the first issue of Footnotes was published, but the October 1966 Footnotes is the earliest edition found to date. It is possible that the newsletter began when the new Orlando Public Library opened in August 1966. Footnotes and the Friends of the Library Newsletter are ancestors of the current Books and Beyond magazine sponsored by the Friends of the Library.

As we celebrate the 100th anniversary of the library in 2022, these publications preserve the history of the Friends of the Library, special events, programs, art and innovation shared with the people of Orange County through the years. 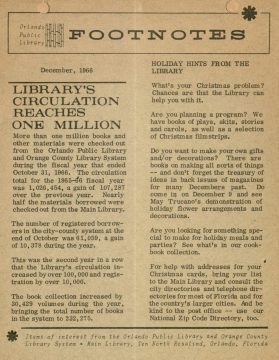 The October edition announced cuts to branch services due to revenue shortfall because of an error in calculating the county library tax. However, the November publication announced that funds were found to alleviate most of the cuts to branch hours. The December Footnotes announced a milestone in OCLS history – the library circulated one million books during the previous fiscal year ending October 31, 1966!

Click on the links below to view the Footnotes from 1966. 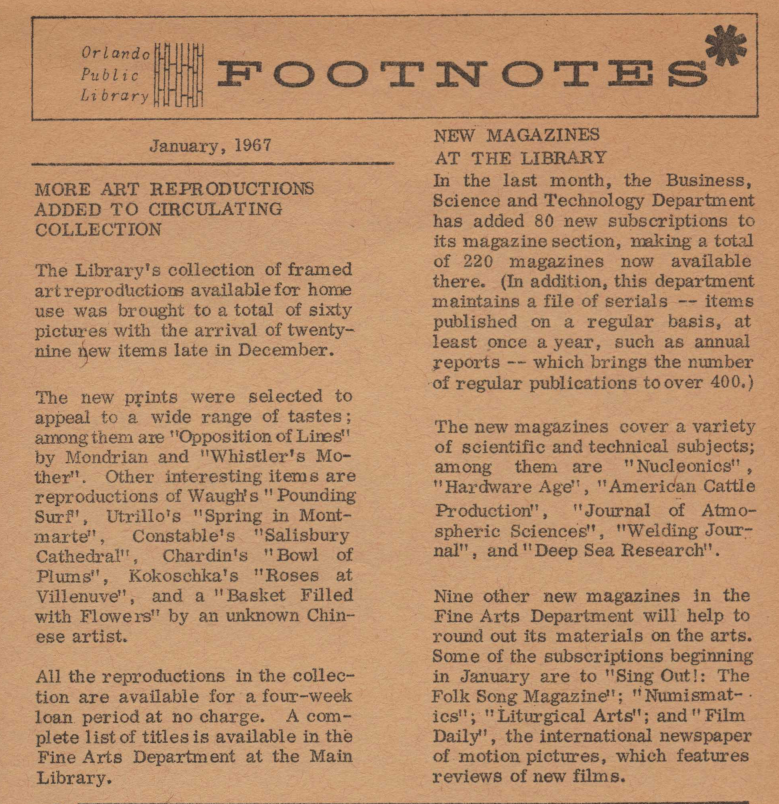 The January edition of Footnotes announces the addition of more art reproductions to the collection for check out. The Main library hosted a British Festival in February 1967, with historical documents never before displayed outside of England. Jordan Marsh sponsored replicas of seals of the monarchy from the British Museum, and 12th century chess pieces were also displayed. The June edition promotes “Summer Nights” at the Main library with showings of American film classics from Hollywood’s “Golden Age,” and special programs for the children and teens. The October Footnotes announces funding for the new West Orange branch on Cypress Avenue in Winter Garden and the December edition provides details as planning begins.

Click on the links below to view the Footnotes from 1967. 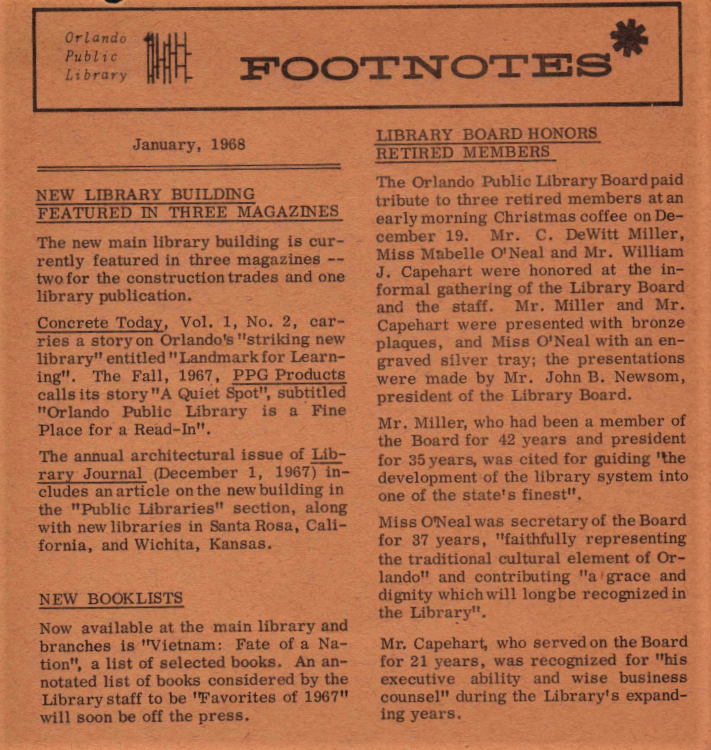 The January Footnotes reported that the new Orlando Public Library  building was featured in three publications: Concrete Today, PPG Products, and the annual architectural edition of the Library Journal. Retired library board members, Mr. C. DeWitt Miller (42 years), Miss Mabelle O’Neal (37 years), and Mr. William J. Capehart (21 years) were honored at a gathering of board members and staff in December. The three board members are shown below in a photo from a special edition of the August 7, 1966 Orlando Sentinel on the opening of the new Orlando Public Library at 10 North Rosalind.

It was announced in February that the library had set aside funds for purchase of additional land adjacent to the current building, most likely the Salvation Army building. The May Footnote announced the addition of a color television to the auditorium for viewing space shots, political conventions and election results and other events of national interest. In November, the Orlando Public Library and the Orange County Library System extended library service to Kissimmee and St. Cloud in Osceola County.

Click on the links below to view the Footnotes from 1968. 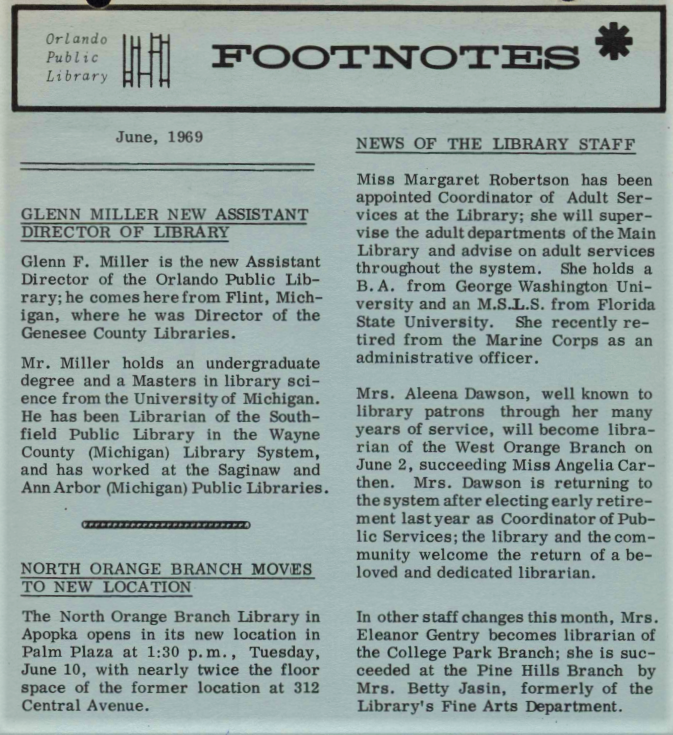 The February Footnotes announced the creation of a YA (Young Adult) Council with students representing Orange and Osceola high schools and junior high schools. The YA Council will promote library services to students in their schools and assist in planning summer programs. The May edition reported on the dedication of the West Orange branch in Winter Garden – the first county owned library branch. 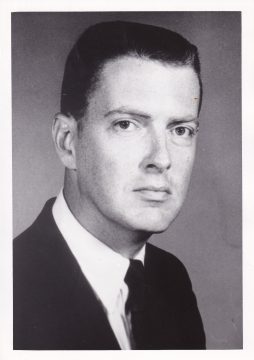 Click on the links below to view the Footnotes from 1969. 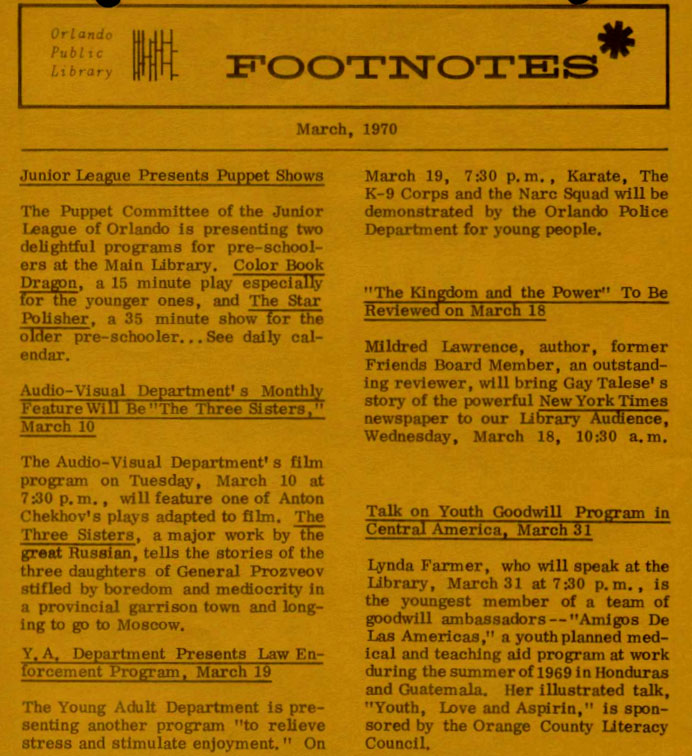 The March Footnotes promotes a program for young adults by the Orlando Police Department on Karate, the K-9 Corp and the Narc Squad. 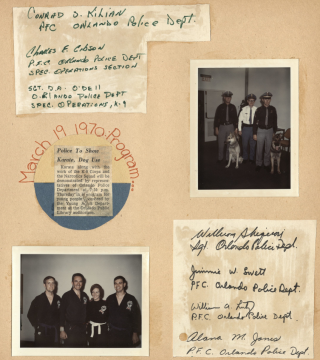 Above: Second from left is Orlando Police Department Sgt. William A. Liquori.  Sensei Bill Liquori trained under Master Peter Urban of New York, eventually starting his own organization USA Goju (logo is closed fist on black gi). In the 1970s, while with the OPD, Sensei Liquori taught Karate to members of the OPD and to the general public at his dojo at 2710 South Orange Blossom Trail. He and his students participated in Karate demonstrations around Central Florida.

Click on the links below to view the Footnotes from 1970. 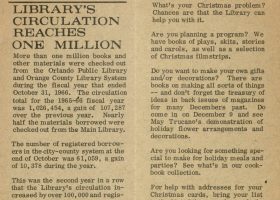 December 1966 Footnotes announces that the Library had reached circulation of ONE MILLION items in a single year. 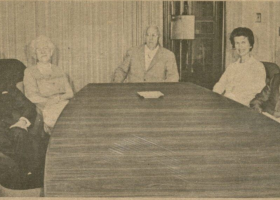 Photo from the special edition to the Orlando Sentinel for the Grand Opening of the Orlando Public Library on August 7, 1966.... 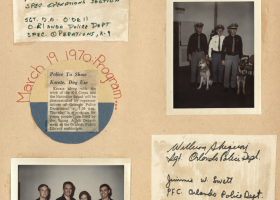 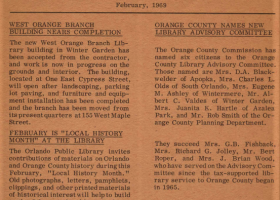 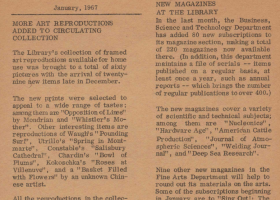 January 1967 - Art reproductions for check out 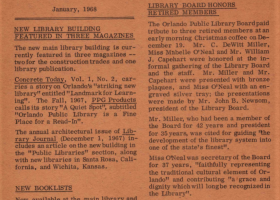 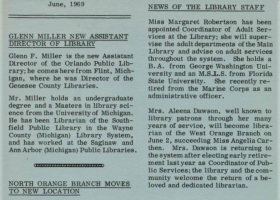 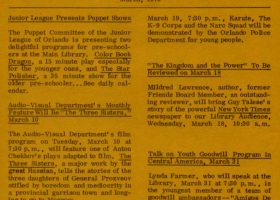