In a letter dated June 5, 1929, Librarian Olive Brumbaugh wrote Bishop Cameron Mann (the first bishop of South Florida in The Episcopal Church) at his Winter Park residence, asking that he consider reducing the rent for the Booker T. Washington Branch Library located in the former rectory of the St. John’s Episcopal Church at 107 E. Terry Street. She states that the library was facing a budget cut of $7,000. 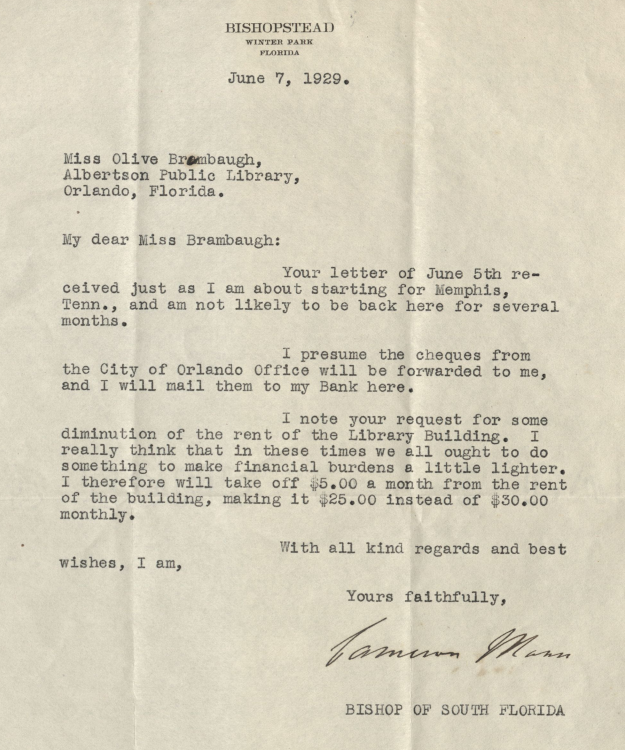 It appears that the financial situation continued to worsen and finally came to a head in the summer of 1931, resulting in the library board, with the cooperation of librarian Olive Brumbaugh, deciding that the library budget be reduced by 25 percent. According to a report in a local newspaper, among the recommendations made by Miss Brumbaugh as a means of reducing operating costs were:

“To have the library open from 11 a.m. to 7 p.m. on week days instead of from 9 a.m. to 9 p.m., and close all day Sunday and holidays. This would save on heat, light and janitor service. Most of the clerical work could be done in the morning before the library opened. Open the colored branch [Booker T. Washington Branch Library] on Tuesdays, Thursdays and Saturdays.”

“Cancel all outstanding orders for books, curtail purchase of new books, cut salary schedules materially. Postpone the training of apprentices, which would be a saving of $1,200 for the remainder of the year.”

“Although deeply distressed about it, neither the librarian nor library staff in any way criticized the board for the action it had taken. They wish to express their willingness in every way to co-operate in the present emergency, to accept salary adjustments, broken schedules, long desk hours, and to try in every way to help make a fair adjustment of the present difficulty.”

Due to the reduced staff and operating hours, it was determined that “the curtailment of service means the closing of the Grand Avenue branch of the library and the discontinuance of the county-wide service.” It was also decided that library would not be able to continue providing books to the school class room libraries.

The discontinuance of county-wide service as a means to cut the library budget by 25 percent was not received well by many of those who did not reside in the city of Orlando. Letters were sent to Olive Brumbaugh and the library board and editorials were published in the local newspapers concerning the library’s cost cutting measures.

Attorney John Wahl, in his letter dated July 9, 1931, commended the library and staff for their “retrenchment in this time of financial stringency” and their “sacrifice in the reduction in their salaries.” 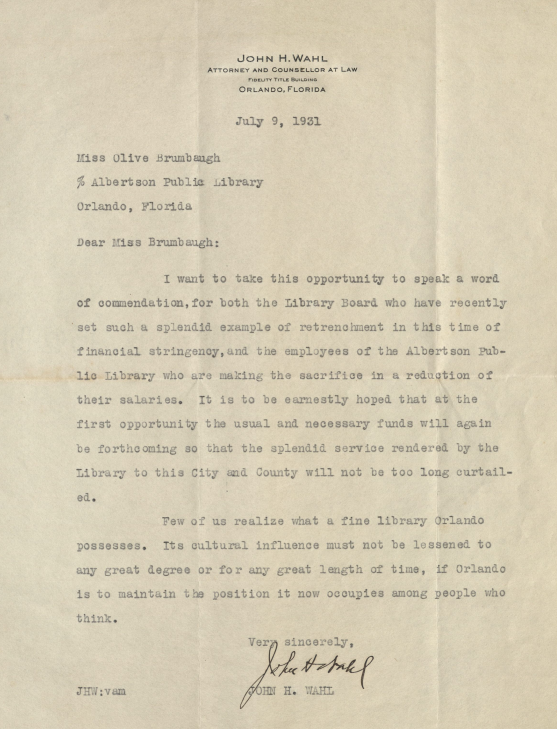 Many of the letters and editorials were from distraught county residents who would no longer be able to access the vast resources of the Albertson Public Library.  Many more heaped glowing praise and expressed appreciation for the library and staff, but none more so than a letter to the editor published in the Orlando Sentinel Star on July 21, 1931 and in the Reporter-Star on July 29, 1931 from Minerva L. Blanton.

Describing herself as “a librarian of somewhat wide and varied experience,” she writes, “We county residents have enjoyed the privileges of the Albertson library so long that some of us actually seem to think that we are legally entitled to them when, as a matter of fact, the county has never paid a penny for this service and we have had it only because of the generosity of the management of the Orlando library. I, for one, wish at this time to acknowledge the great debt we owe this library and to express my appreciation of the excellent service we have enjoyed….”

She continues with a challenge to Orange county: “I hope that Orange county will be the first to take advantage of the new library law and that a contract shall be entered into with the Albertson library for providing service to all citizens throughout the county. This library could and would give us the most efficient and economical service that could be devised. We pay for roads, schools and everything else; why should we not pay for library service?”

In a rebuttal to the editorial, of Minerva L. Blanton came this heated response by Apopka resident R. M. Shearer. It is obvious that country residents felt keenly the loss of access to the library services and collections. 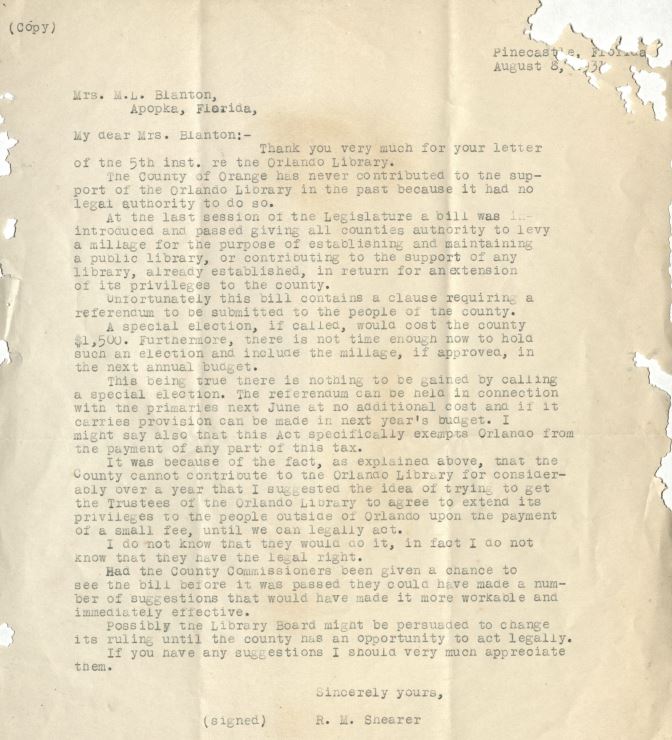 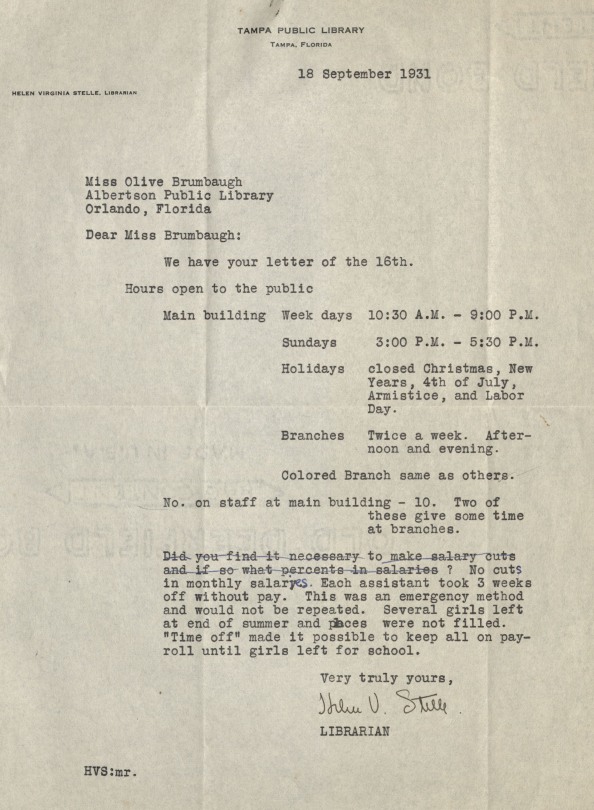 Letter from Helen Virginia Stelle in response to request from Olive Brumbaugh in September 1931.

The 1931 Annual Report (below) mentions closing of branches on July 1, 1931, probably referring to the Grand Avenue Branch and the books previously provided to school libraries. The report also shows an overdraft for the year of $1,321.32, equivalent to about $25,000 in 2022 dollars. 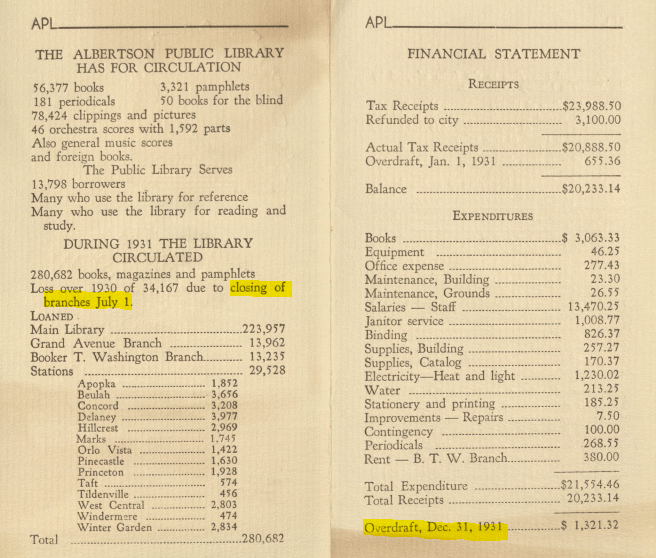 Monthly reports and annual reports provide valuable information on the state of the library through the years. 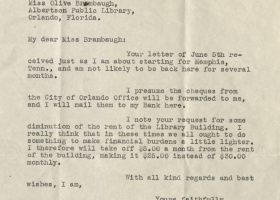 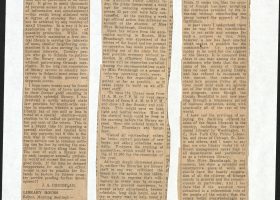 Newspaper articles and editorials published in local newspapers expressing sadness that only residents of Orlando would have access to library service... 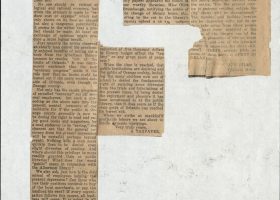 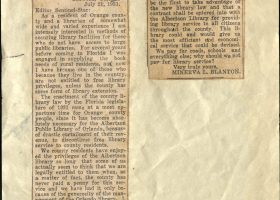 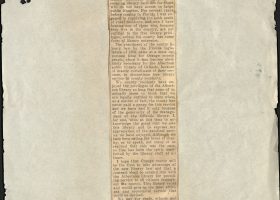 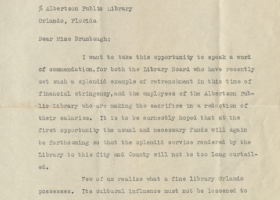 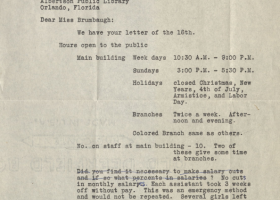 Response from Tampa Librarian Helen Stelle to Olive Brumbaugh's request for information on how they were cutting costs. 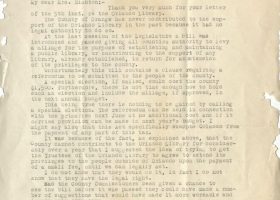 Rebuttal to the editorial by Minerva L. Blanton.

Correspondence from patrons and editorials published in local newspapers expressing sadness that only residents of Orlando would have access to library services.

Newspaper editorials published in local newspapers expressing sadness that only residents of Orlando would have access to library services.