ABOVE: Arnold Sobel at the Northgate Library in 1983.

Photographs of employees who worked in the Extension Department and the library Annex from 1966 to 1983, were collected and  carefully and lovingly arranged in a scrapbook to preserve the memories of the staff and their shared experiences. 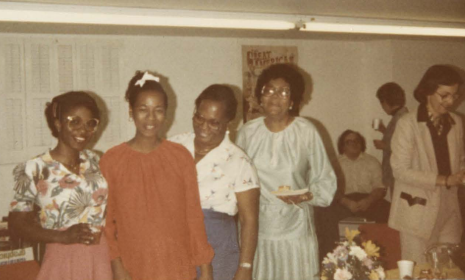 The photographs document celebrations and parties, working in the Extension Department office and at the Annex, traveling with the bookmobile, and working at the Pine Hills, North Orange, Fort Gatlin, Northgate, Eastland and South Trail branch libraries. 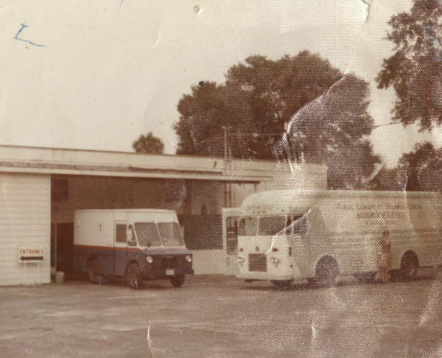 ABOVE: The 1961 bookmobile at the Annex at 453 North Orange Avenue.

Other photos feature the bookmobile staff at stops in Bonneville, Lake Cane, Zellwood, Peach Lake, Oviedo and Isle of Cat. The bookmobile in these photos was purchased in 1961 to replace the 1949 bookmobile which was donated to the library by the Sorosis Club. The library’s innovative Books by Mail program that still today provides delivery of library materials throughout the Orange County service area, made the library’s bookmobile service unnecessary.

Read more about the library’s bookmobiles. 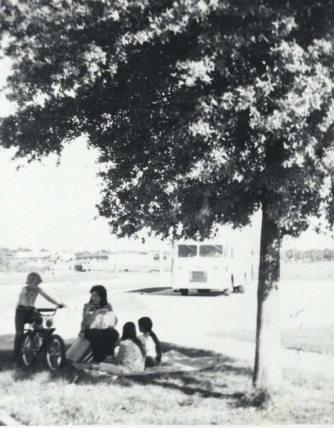 ABOVE: Storytime at the Isle of Cat bookmobile stop. View additional photos under IMAGES below. 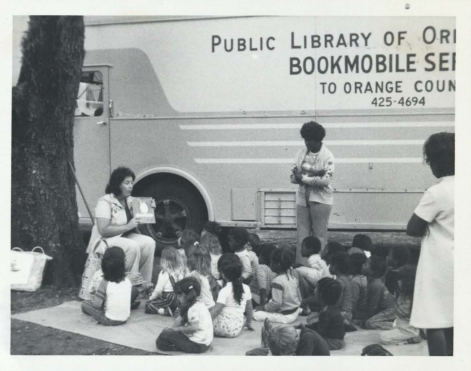 There are other surprises and treats in the scrapbook. Several pages document a visit from the author of the “Encyclopedia Brown” series, Donald J. Sobol in June 1983. There are also postcards from staff vacationing in faraway places. 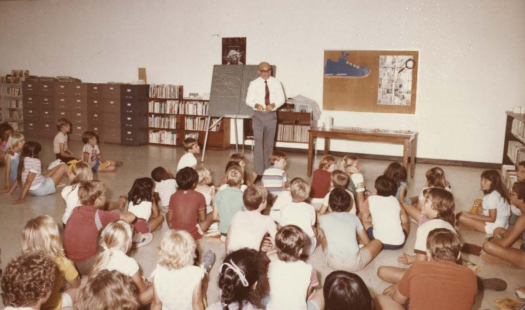 ABOVE: Donald J. Sobol at the Northgate Library in 1983.

The Extension Division is described in detail (below) in this excerpt from the Albertson Public Library 1928 annual report. It included mini-libraries in city and county public schools – elementary, junior high, and high schools – and, also, two private schools. 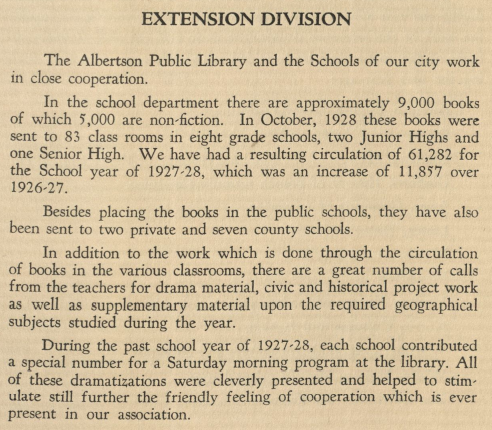 The Albertson Public Library monthly reports from 1923 to 1931, sometimes include statistics on the number of books circulated at each of the school stations.

The 25th Anniversary booklet published in 1948, lists plans for the the growth of the Extension Services, including additional stations in the public schools in Orlando and outlying areas, additional branches, a Traveling Branch Library (bookmobile), and construction of a new building for the Booker T. Washington Branch. Additional details about the stations, branches and bookmobiles can be found in the annual reports.

The scrapbook dates – 1966-1983 – are significant as the new Orlando Public Library opened in 1966 and the library expansion opened to the public in April 1985.

Space was leased for an Annex for the Extension Department as the staff that worked there did not interact with the public who visited the Main – Orlando Public Library. In 1976, a 2nd Annex was leased in the old Salvation Army building for Talking Books, Books by Mail, and other behind the scenes departments due to the need for more public space in the library. Read more about the history of the Orange County Library System.

Peruse the entire scrapbook or use the index below to quickly locate people, branches, and the bookmobile. If you can identify anyone not listed, leave a comment below with the page number, person’s name and location in the photo.

Index to Staff and Branch mentioned in Extension Department Scrapbook 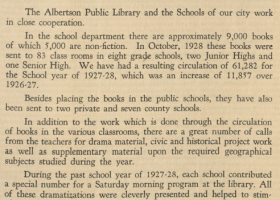 Highlights of accomplishments in the Extension Department in the 1928 Annual Report. 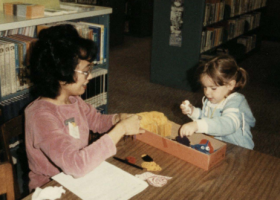 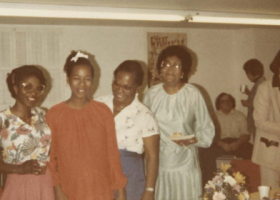 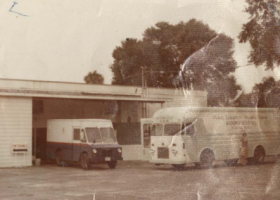 The delivery truck and bookmobile at the first Annex. Not sure if this is the 1st annex or the 2nd annex that... 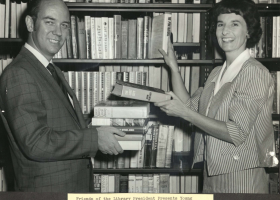 Friends of the Library Fort Gatlin

Friends of the Library president presents books to the Fort Gatlin Library and Martha Staples. 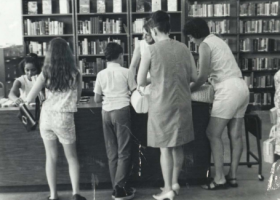 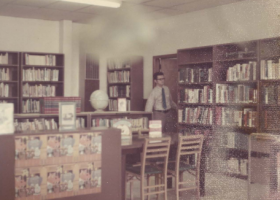 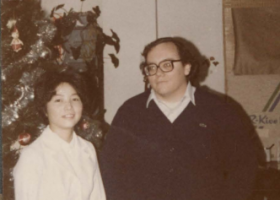 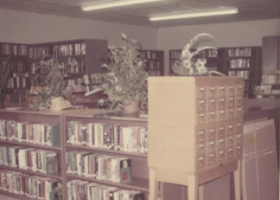 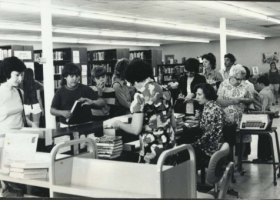 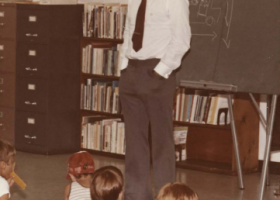 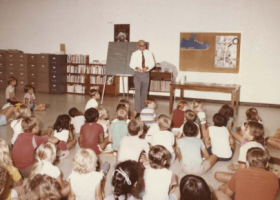 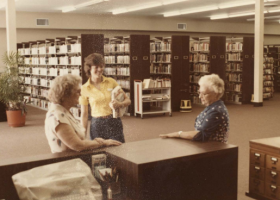 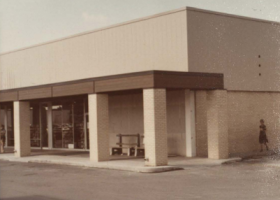 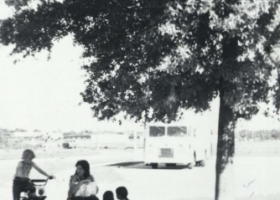 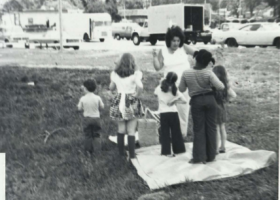 Bookmobile stop and Storytime in Oviedo - 1975 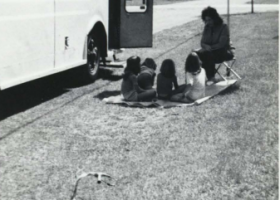 1975 - Storytime on the lawn at the Bonneville bookmobile stop 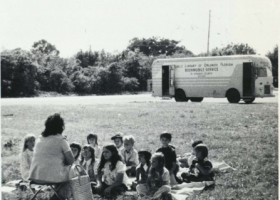 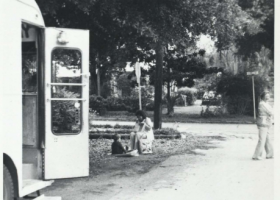 Storytime at the Tangerine bookmobile stop. 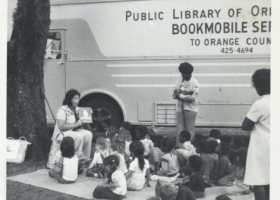