Captain Charles L. Albertson, a retired police inspector of New York City, and a winter resident of Orlando, had for many years been collecting books at his home in Waverly, New York. In November 1921, Captain Albertson offered his collection to the city of Orlando, on the condition that it furnish a suitable building to house it. The contract between the city of Orlando and Captain Albertson provided that Orlando would accept the gift of the Albertson Collection and furnish the library building; that the library should be known as the Albertson Public Library; that Captain Albertson should be Advisory Superintendent of the Library throughout his lifetime; and that Orlando should suitably maintain the library.

SEARCH OrlandoMemory.info using the surname “Albertson” for more information, photos, documents and original biographical stories about his time as a NYC Police Inspector!

An article published in the Evening Reporter Star on 10 February 1925 announced the placement of a painting of Captain Albertson on 9 February 1925, however, the painting shown above is not this painting. It appears to have the name Mark French as the artist. The whereabouts of the original painted by Mrs. Daish are unknown.

SPLENDID TESTIMONIAL IS WORK OF MRS. DAISH, AN ARTIST OF REPUTATION.

This week has been an eventful one in the annals of the Albertson Library. As a testimonial of esteem and appreciation of this part of the establishment of the library, a portrait of Captain Charles Albertson has been painted and hung in the lobby where it greets the eye as one enters.

It will be of interest to know that Mrs. Daish, who painted and presented the portrait, is an artist of wide experience and training, having studied under some of the best instructors in our country. At the Corcoran Art Gallery in Washington, she was a pupil of Prof. Messer, and Richard N. Brooke in oil painting, and of James Henry Moses and Miss Bertha Perrie in Water color. She studied also with Frank Alvah Persons of New York at his studio among the Berkshire Hills where her work was mentioned as having the feeling of a Corot. Later she was with Thomas Anschutz who was the principal of the Academy of Fine Arts in Philadelphia, and studied also at the Chlorosis School in Paris where she was criticised [sic] by the great Contaur.

Mrs. Daish has been most fortunate in having been closely associated with Carrie Dawson Scott, who was a student of the late William S. Chase, and later of Cecelia Beaux of New York, where she took a very high rank in her work. Mrs. Daish was also associated with Miss C. C. Critcher, a medalist of the Corcoran School and a prize winner at the Beaux Arts in Paris, and is now a member of the art colony in Taos, New Mexico. Miss Critcher is an artist of national fame and is ranked as one of the five great woman painters in the United States.

Miss Critcher’s influence has been greatly felt and absorbed by Mrs. Daish, who is an ardent worker, with the ability to portray the best that that is embodied in her subject, and she counts no effort too great that produces a true reflection of personality. She is a charter and life member of the Orlando Art Association, which attests her faith in Orlando’s becoming the art center of Florida.

Orlando’s art lovers are happy to have Mrs. Daish in their midst, and the Albertson Library is most fortunate to have the gift of her finished product – the portrait of Captain Albertson. 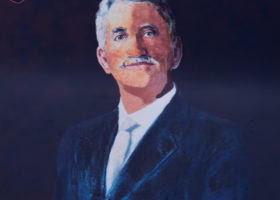